A cultural icon in the city of Napa is gone, sawed off and stolen.

The Napa Valley Register posted a photo of the vandalized eucalyptus tree near Alston park.

Someone cut off a piece of wood shaped as a moose head and painted a smiley face.

The beloved moose tree has been a go-to spot for young people to unleash their creative energy. No one knows when the tradition started, but over the years, a growth on the side of a eucalyptus tree had been painted time and time again.

It's taken on rainbow colors in honor of same sex marriage, Orange and black during the Giants' latest World Series run and most often, the colors of Napa's local high schools. 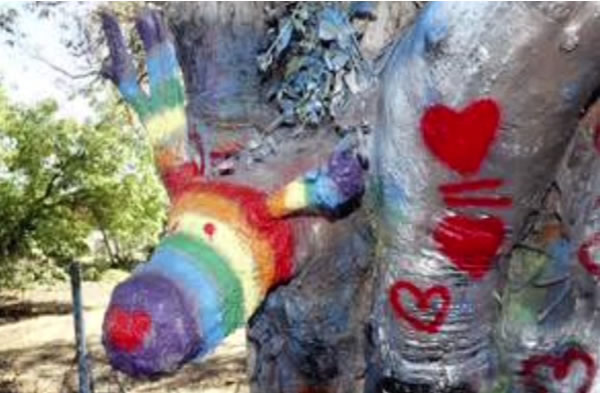 But now that the moose is gone, the people of Napa have been in mourning.

Napa resident Jeff hammond even brought flowers. "Well I saw it yesterday and it really uh, kinda choked me up. I've lived here 16 years and the moose has been here ever since I've been here," he said.

The moose disappeared New Year's Eve. One neighbor says it was around 11 p.m. when her husband alerted her to the sound voices and a chainsaw. "I went to the back door and I said, okay it does sound a bit like a chainsaw, but I never put it together that the moose was chopped off," Napa resident Neha Hoskins said.

The moose's days on Dry Creek Road were already numbered. The large eucalyptus tree is scheduled to be removed in the Spring to make way for a sidewalk and a new housing subdivision.

But the moose was supposed to live on at Downtown Joe's where it was going to be mounted on the wall for all to enjoy.

Councilman Peter Mott still has hope that will happen. "I'd like to tell whoever took the moose, no questions asked, if you want to bring it down to city hall or to Downtown Joe's and turn it in, we'll make sure that it's handled properly," he said.

Allie Huffman always wanted to paint the moose, but now will never get the chance. She came to the tree anyway to create her own version and says she'll miss the original. "I hope no one just took it to hang it up on their wall at home and not tell anybody because I feel like it should be in a museum. It's just iconic. It really is," she said.

An iconic piece of Napa that residents hope will turn up and be part of the community once again.
Related topics:
societynapanapa countynapavandalism
Copyright © 2021 KGO-TV. All Rights Reserved.
More Videos
From CNN Newsource affiliates
TOP STORIES