KGO
By Wayne Freedman and Liz Kreutz
SAN ANSELMO, Calif. (KGO) -- PG&E has announced that another round of Public Safety Power Shutoffs could happen.

PG&E now says only three Bay Area counties might be impacted instead of nine. Those three counties are Sonoma, Napa and Solano.

At a press conference Tuesday evening, PG&E said they could take place between 7 a.m. and 8 a.m. on Wednesday.

The following schools will be closed because of the PG&E outages in Sonoma County:

What's more disconcerting than a community watering hole without the cheers, the clinks, or in this case, the customers?

It's now the permanent fate of Stout Brothers in downtown Santa Rosa.

"It is very challenging to move all the inventory out. And refill. It is like opening a new restaurant when you do that," said owner Sonu Chandi.

In Sonoma County, those challenges extend far and wide. In Windsor, the Russian River Brewing Company paid $76,000 for an emergency generator to protect its beer.

"This is the third time. If we're dealing with a new normal, it is not sustainable," said co-owner Natalie Cilurzo.

On Tuesday, the brewery bottled its famous Pliny the Elder, with tanks at the ready.

If the power kills refrigeration, a loss could ripple through the local economy.

"We have continuing expenses," said Cilurzo. "Bills, 200 people to pay, business does not stop just because we're closed."

They know those realities first-hand at Molesberry Market near Larkfield, where owner Joe doesn't know what to expect. PG&E's map puts them in a shut-down area. The address check on that website says they're alright.

What should he believe?

"They say it will be fixed eventually but when is eventually and how long," mused Joe.

"Can you wait until eventually?" we asked.

BEING PREPARED BEFORE THE LIGHTS GO OUT

Talk about being prepared, during the last power shutoff Odessa Shaerkar and her family were without power for four days. A battery and a portable solar panel became somewhat of a savior.

"I put this (solar panel) on the roof of my car outside when the power is out and it basically charges the battery again. So you can charge an iPhone up to 30 times or something. It's really cool," said Shaekar.

For this potential power shutoff, Shaekar was also ready with a special light bulb.

"It automatically activates in the event of a power outage. So this is for the kids not to have a darkroom in the case of a PSPS. That dark blackness is harder for them," said Sahekar.

Earlier in the day, PG&E announced that none of this planning will be necessary for the following counties: Alameda, Contra Costa, Marin, Santa Clara, Santa Cruz and San Mateo.

"This time we are just going to continue monitoring in those areas," explained PG&E spokesperson Tamar Sarkissian.

The utility confirmed that a total of 181,000 customers could potentially be affected throughout northern California. In the Bay Area the number is much smaller: 51,527.

"This is not a decision that we take lightly we understand how it impacts our customers and we only do this out of safety," said Sarkissian.

"We are going to disseminate information that says that we don't expect Marin County to be affected at this point but that is also subject to change," said Sgt. Brenton Schneider.

The utility company said they began the notification process by phone, text and email in Sonoma, Napa and Solano.

One day before the latest PG&E power shutoffs are expected to begin, people around the Bay Area are preparing by buying ice and extra candles. But they're doing so begrudgingly.

"It's really frustrating, really unorganized," Kate Bowman, who lives in San Rafael, said while buying several bags of ice Tuesday morning. "It feels like preventative measures are not in place and it's being pushed over to the cities and the consumers."

On Wednesday, PG&E says they plan to turn off power in parts of nine counties across the Bay Area because of high winds and a fire threat.

United Markets in San Anselmo has these handwritten thank you notes hanging at the front of the store. During the last power outage, they set up a barbecue & handed out 800 meals to ppl w/o power — even while losing thousands themselves.

The store is now preparing for round 2. pic.twitter.com/SXSW9eebmo

Businesses - like United Markets in San Anselmo in Marin County -- that lost power during last month's outages are terrified about the prospect of losing power again.

"It would not be good for us," Robert Bowden, the store supervisor, said about the possibility of losing power this week.

Bowden said last month the family-owned grocery store lost thousands of dollars in food. He said the store only learned they would lose power an hour before the last shutdown took effect, giving them no time to prepare.

This time, they're hoping they won't lose power, but they're not taking any chances.

"We've got another truck coming, refrigerator truck coming today to start unloading and putting it into that, but it's just a ton of labor and waste of time," he said.

This latest power outage comes at really bad timing: A week before Thanksgiving. United Markets just got in thousands of dollars of turkeys — which they can’t afford to lose. #pgeshutoff pic.twitter.com/Hzz6cLuxaG

Not to mention, it's terrible timing: one week from Thanksgiving.

"We just got in all our turkeys," Bowden said, "So we have thousands of dollars of turkeys in our walk in right now."

Bowden said during the last shutoff, the grocery store set up a barbecue and gave out 800 meals to people in the community. They plan to do that again this week.

"They're so nice to let people in with flashlights taking whatever they can off the shelves," Kate Bowman said, "But there's a certain desperation that happens, and it really leaves people vulnerable, very vulnerable."

This is how little trust there is: United Markets is not even on the list right now to lose power, but they’re paying for a refrigerator truck just in case. During the last outage, they only got added to the shutoff list 1 hour before power went off giving them no time to prepare 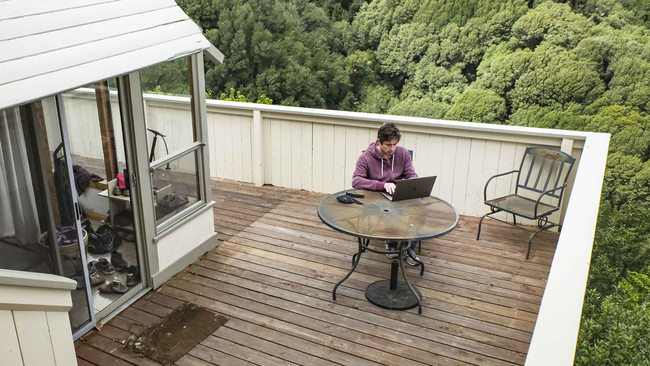