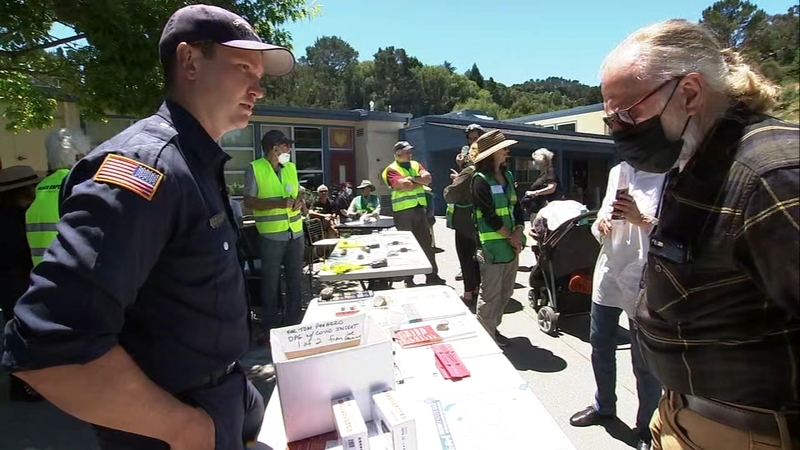 MARIN COUNTY, Calif. (KGO) -- Preparing for the the worst in the North Bay. Residents are dealing with the real possibility of wildfire or other emergencies in their neighborhood. Firefighters ran voluntary evacuation drills Saturday to help people get ready just in case.

Barbara Lockhart showed us her emergency go bag. It's chock full of everything she'd need to evacuate her home in Sausalito, there's even a solar charger.

"It'll charge a cell phone or a tablet," said Lockhart.

This week's unusually early red flag warning is just a sign of things to come, according to California's top emergency and fire officials, who gathered for an event in the East Bay to kick of "Wildfire Preparedness Week."

Lockhart grabbed her bag after she and hundreds of her neighbors in Hurricane Gulch got an alert message on their smart phones to evacuate.

This evacuation drill was voluntary but many took part. Neighbors were instructed to meet up at a staging area in Southview Park in Sausalito learning what to do and where to go if a wildfire or earthquake was to force them out.

"The message is you should always go by car, it's the safest way out for everyone," said Marshall Nau from Southern Marin Fire District.

The drill was organized by Southern Marin Fire District, which fought a fast moving grass fire in Marin City on Friday.

RELATED: Bay Area gearing up for a smog-filled summer -- and your mask won't protect you

"We want to make sure the community knows how to evacuate and how important it is to practice ahead of time," said Nau,

"Here in Hurricane Gulch we have gusty summer winds, it's important there's no reason not to be prepared," Lockhart added.

Last year there was no drill for Sonoma and Napa County residents. Thousands were chased out by the monster Glass Fire which destroyed hundreds of homes.

"This is something we think about all the time, reading about the drought and fire season, wondering which way to go if we had to and now we know," said Sausalito resident Sean Elder.

RELATED: How to prepare for a wildfire evacuation
EMBED More News Videos

Hours later, there was another drill for residents in the Tam Valley neighborhood of Mill Valley. People got fire safety information and a free solar powered emergency radio.

"We want to do what's right, firemen will tell you it's not a matter of if but when, so we're prepared," said Steve Levine from Mill Valley.