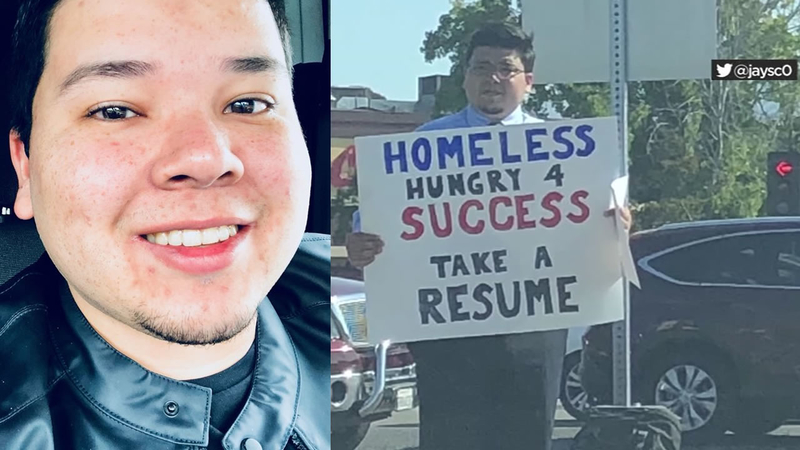 In the distance and on the phone is 26-year-old David Casarez. He’s the homeless man who stood on a busy intersection with a now-viral sign that read, “Homeless. Hungry 4 success. Take a resume.” Since a passerby’s tweet went viral, he’s received hundreds of job offers. #abc7now pic.twitter.com/jrtQkSaIPH

Casarez says he was prepared to spend days at this intersection, offering his resume to drivers. All it took was @jaysc0’s tweet, which has now gone viral. The pictures Jasmine Scofield posted included Casarez’s resume and his sign that read: Homeless/ Hungry 4 Success. #abc7now pic.twitter.com/usFHmkSRag

The @TAMU graduate says he left his job at @GM and in mid-Sept he set out for #SiliconValley. When an investment deal went south, Casarez had limited funds & nowhere to go. He was living out of his van, until it was repossessed. Now he spends his nights on a park bench. #abc7now pic.twitter.com/FdKnZ7Gtak

.@jaysc0 says she wanted her friends in the tech industry to see Casarez’s sign and resume. She figured that would be a good start for the homeless web developer. Her post has now gone viral. So far, more than 134k people have RT’d her post. #abc7now pic.twitter.com/9RuAmTOeXZ