Small businesses and restaurants in the historic neighborhood are banding together. But they need your help.
KGO
By Lauren Gee
SAN FRANCISCO (KGO) -- If you've ever been to San Francisco's Chinatown on any weekday afternoon, pre-pandemic, you'd be struck by the vitality of the community. Residents weaving through the tourists, the sound of children throwing poppers onto the ground, workers unloading boxes of fresh produce onto crowded sidewalks while locals compete to find the best deals.

Now, many businesses in America's oldest Chinatown are at risk of closing. We spent a day in Chinatown to find out how the neighborhood is really doing.

Our day started as we emerged from the underground parking lot at Portsmouth Square where we were first shocked to see dozens of people.

It wasn't the normal sight of seniors huddling together playing cards and chess, or dancers practicing their Chinese fan dance routine. Instead, it was a sea of people wearing face masks and shields as they waited to get a COVID-19 test.

Grant Avenue, Chinatown's most popular corridor for tourists, was empty. Entire blocks of businesses were adorned with closed signs, colorful toys inside souvenir shops were locked behind metal gates and the red lanterns dangling in the wind were the only moving objects in sight.

"It feels depressed, you know, I mean, if there's no other way to describe it, it feels depressed and it doesn't feel like Chinatown," Malcolm Yeung, executive director of Chinatown Community Development Center, explained.

San Francisco was one of the first cities in the nation to implement the shutdown, which prompted empty streets across town, but Chinatown Merchants Association's Advisor Betty Louie believes the neighborhood was hit even earlier because of xenophobia.

What started as attacks, to empty stores, then a major decline in tourism, it has been a detrimental year for the community, Malcolm Yeung explained.

"Even back then (pre-pandemic), I would say we have about 930 storefronts in Chinatown. I would be surprised if even 150 were operational right now," he added. 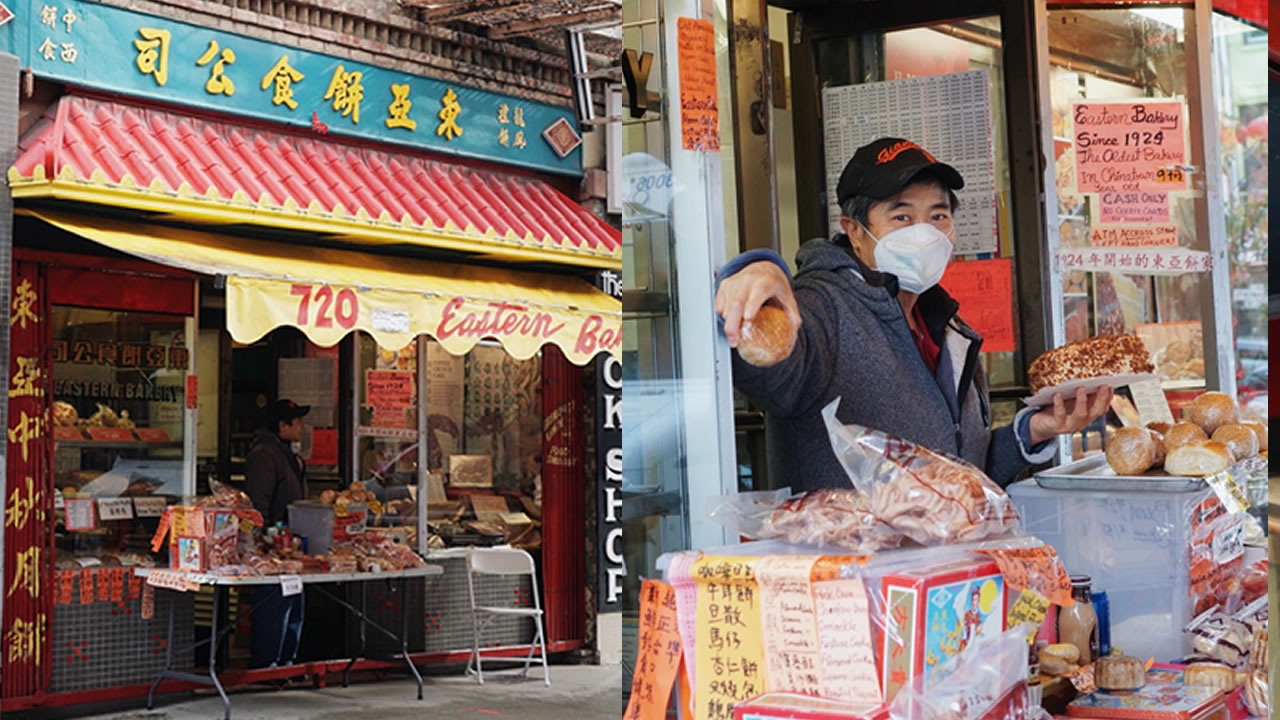 Since the pandemic started, Eastern Bakery owner Orlando Kuan has moved his pastries outside for people to see on Grant Avenue.

We spotted Eastern Bakery owner Orlando Kuan sitting on a plastic fold-out chair under his shop's awning with a table of freshly-baked treats.

"Chinatown is almost dead," he explained.

Even as the oldest bakery in Chinatown, Kuan says he lost at least 70% of sales since the shutdown started. It's his loyal customers who rave about the bakery's coffee crunch cake, moon cakes and Smackles (crispy savory cookies) that keep him going.

"It's nothing like before," Yeung said. "I think that Chinatown and particularly Grant Avenue is like a ghost town right now."

To prove just how empty the neighborhood is, we went to the most crowded shop we could think of -- Chinatown's iconic Golden Gate Fortune Cookie Factory. The storefront is tucked in an alley, but you can't miss it because on any afternoon, you'd smell the sweet scent of cookies and see visitors lining out the door waiting to squeeze through for a peek at how fortune cookies are made. This time, we missed the alley and the store was empty.

Now, Chan says he can't even afford to turn his machine on because no one is buying his fortune cookies. Since the pandemic, Chan says he's lucky to see 10 customers per day -- they're all local. 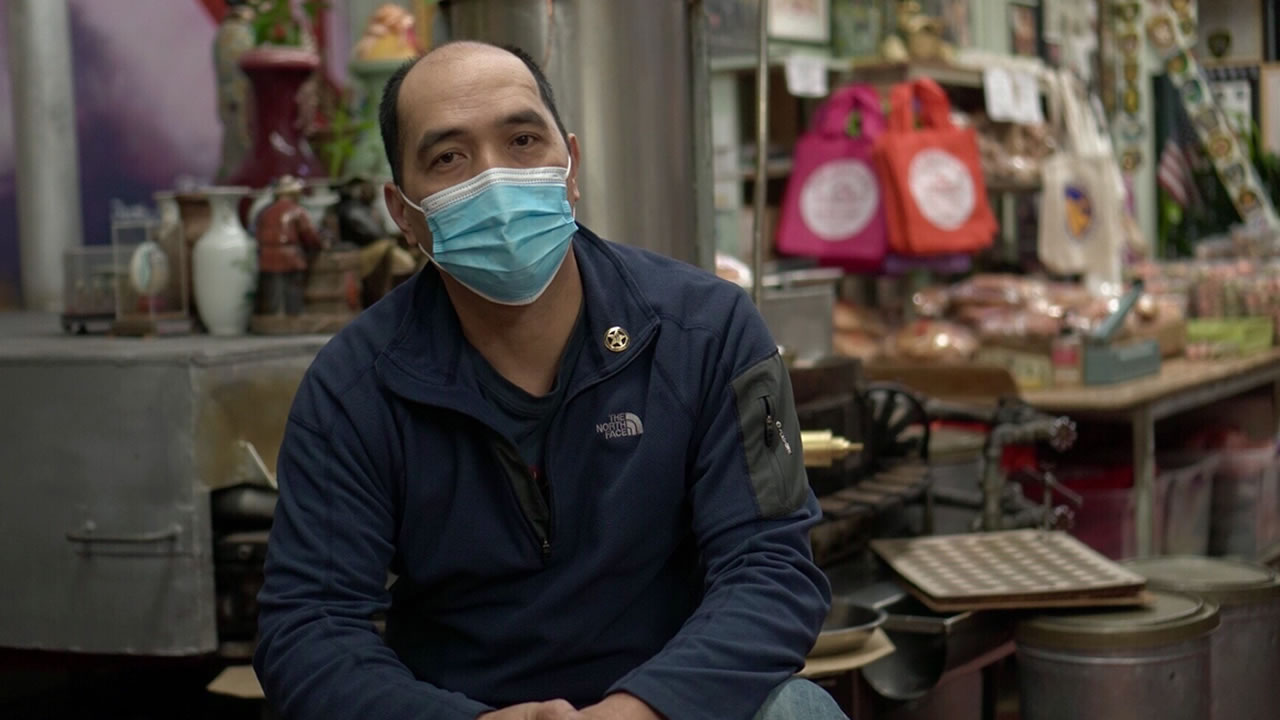 "This business is 50 years here. I can't afford to shut it down because it's a legacy," said Kevin Chan, owner of Golden Gate Fortune Cookie Factory in San Francisco's Chinatown.

As we walked through the streets with Chinatown's Community Director Malcolm Yeung, we realized the neighborhood wasn't all that quiet. Shopkeepers shouted to one another from across the street, locals who recognized Yeung exchanged their greetings and, he pointed out a silver lining amid the pandemic -- community.

Following the announcement of one of Chinatown's oldest and most iconic restaurants permanently closing, the community's resilience was on full display.

Since the shutdown of indoor dining, Far East Cafe's 100-year-old hand-carved wooden chandeliers, prohibition-era dining booths and Lazy Susans have been collecting dust. Owner Bill Lee and his daughter, Kathy Lee, described how strange it was to stand in a dark space that was once a hub for family banquets, wedding celebrations and huge association gatherings. Bill Lee shared that he had less than 30 orders a day and the latest ban on outdoor dining was "the nail on the coffin."

Longtime customers, neighboring business owners and even Supervisor Aaron Peskin plead with Lee to hold off on closing so they could secure $1.9 million, a relief package that would fund CCDC's Feed and Fuel Chinatown program, which pays local restaurants to make meals for neighbors living in single-room-occupancy hotels.

Business owners in San Francisco's Chinatown are speaking out, demanding that the city do more to help them. This comes as news that Far East Café, a staple in Chinatown for more than a hundred years, announced they will close next week.

The Lees said they're taking a break and hope the wait will give them time to reboot and figure out how to continue moving forward. "The community, they support us 100%."

"I think the pandemic has really brought us much closer together," Merchant Association Advisor Betty Louie said. "We're all helping each other as much as possible."

The closed streets program was another way the neighborhood was able to connect with one another and boost business. Louie is optimistic that the program brings a newfound perspective to the area and entices new businesses with lowered rent.

As Lunar New Year soon approaches, the CCDC's executive director said it's going to be devastating since no parades or street festivals are scheduled. Chinatown businesses generate up to a third of their annual revenue during the holiday. "That's why the help from the city, the donors, from whoever to keep the restaurants open, the immigrants employed, it is more critical now than ever," Yeung said.

"The only way we'll survive is to have people come and support our small businesses and they won't know what it's like if they don't come and visit and they'll be pleasantly surprised," Louie adds.

Louie was right -- we were prepared to see closed storefronts and quiet streets, but what we didn't expect to find was the generosity and resilience of business owners who refused to give up. Though Chinatown may look like a ghost town, the community is coming together and most importantly, clinging to hope.

"When Chinatown reopens for business, it will be a great place to come."