'I am American': South Bay judges star in rare video in honor of AAPI Heritage Month 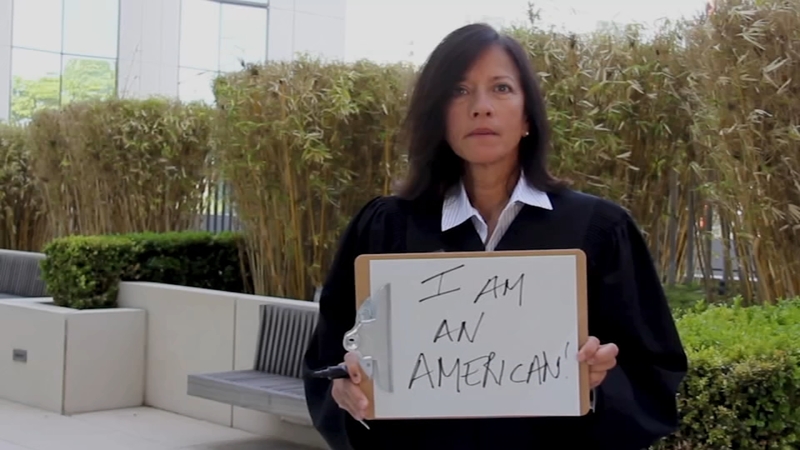 SANTA CLARA, Calif. (KGO) -- We don't often think of camera-shy judges turning to video to promote social justice. But that's exactly what some South Bay judges have done. Race and social justice is a pillar of Building A Better Bay Area.

On rare occasions when cameras are allowed in Santa Clara County Superior Court, we're told not to take video of the judges. That makes this video unusual that features 13 of them, all of them of Asian American or Pacific Islander heritage.

"I'm Judge Erica Yew, and I'm an American." Yew, who became the first Asian American woman judge in Santa Clara County nearly 20 years ago, opened the video with that statement.

"We're camera shy, and we're shy of publicity, but we felt on balance it was an important thing to do," Judge Yew said.

The eight-minute video shares personal insights how they, as members of immigrant families, have faced injustice. Judge Jacqueline Arroyo said her father, a decorated veteran and a retired Marine Corps officer, and others of his generation are an example.

"They are often discriminated against, despite having faithfully served our country. I am Judge Jacqueline Arroyo, and I am an American."

One by one, the judges reveal their human side and their commitment to diversity, inclusion and equal justice while being fair-minded.

RELATED: What to know about the 'model minority' myth and why it's harmful to the AAPI community
EMBED More News Videos

"When we deliver messages that can be sometimes really harsh, hard things for people to hear, that we do it in a respectful and human way," said Judge Yew.

The video has caught the attention of teachers, who plan to use it in classes, and of other courts that may produce similar ones. An earlier video focused on the message of social justice.

One by one and then in chorus, the judges of Santa Clara County Superior Court end the "We Are Committed" video saying, "We are committed to achieving justice and equality for all."

Resources to help the Asian American and Pacific Islander community