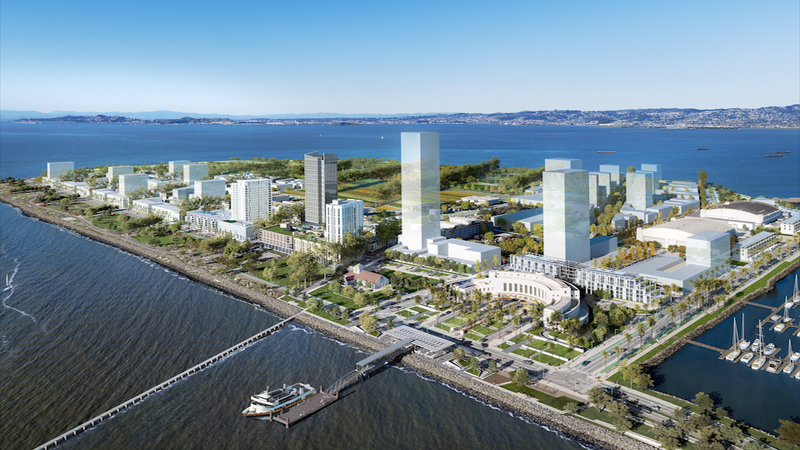 SAN FRANCISCO (KGO) -- If you've driven across the Bay Bridge lately, you may have seen the signs announcing new homes being built on Yerba Buena and Treasure Island. Nestled between the two spans of the Bay Bridge, homes are now being built for 24,000 new residents.

"Out of 8,000 new homes, 2,173 will be affordable," said Robert Beck, Executive Director of the Treasure Island Development Authority.

Beck is overseeing the massive renovation of two islands in the middle of the Bay. Yerba Buena Island that links the two Bay Bridge spans and Treasure Island right next to the bridge.

Treasure Island is man-made, built on top of sand shoals to host the 1940 Golden Gate International Exposition. A huge fair inviting the world to San Francisco, promoting it as the Gateway to the West.

The Pan Am clipper offered the world's first transpacific airplane flights. Treasure Island was supposed to turn into an airport when the fair closed.

But with war looming, the U.S. Navy seized the man-made island. There were already Navy personnel living on Yerba Buena when World War II started. The two islands became the strategic headquarters for the Western Naval Fleet during World War II.

Naval Station Treasure Island closed in 1997. The Navy sold the islands to the City of San Francisco for $108 million.

Since then, the city has been working with the Navy to clean up toxic waste and garbage left behind by both the Exhibition and the Navy.

Now, much of the work being done is focusing on the future residents.

"A lot of the old Navy infrastructure is obsolete and beyond its useful life and so were building out a tremendous amount of infrastructure," Beck says.

Before new roads can be laid, the island has to be made higher to account for sea-level rise.

Dirt taken from the building of the newest Caldecott Tunnel bore was brought in to help stabilize the ground.

"The intention is to account for 100-year storm surge, plus 36-inches of sea-level rise," said Beck.

Pipes on the Bay Bridge bring water to the island, work is underway on reservoirs.

New water pipes and power lines will be installed to serve both islands.

When completed in 2035, Treasure Island be a much different place.

Military-era housing will be demolished to make way for almost 300 acres of open space, including an urban farm. The buildings that were once part of the Exposition will be converted into a business district.

On Yerba Buena Island, trees planted by the Navy, and removed to make way for construction, will be replaced with native trees and plants. Topping off the island, a public park with 360-degree views.

Developers just broke ground on Condominiums that will offer breathtaking views of the bay.

Will Fleissig is heading up the development partnership that will build the new neighborhood, the Treasure Island Development Group.

"In the first phase, on Yerba Buena Island, will be 260 condominium units," said Fleissig.

On Treasure Island, there will be a combination of retail and residential developments starting at six stories.

"As well as high-rises varying from about 150 feet to one building which will be 450 feet," said Fleissig. "We call it the icon tower which you'll see from the whole Bay Area."

Don't expect to drive much if you decide to live on Treasure Island, the city is encouraging people to use public transit. The Board of Supervisors is currently considering a fee to drive onto the island.

Work has just begun on a new ferry terminal. It will take residents from the Ferry Building in downtown San Francisco and drop them feet from home.

According to Fleissig, "From there, everything will be about a 10 to 15-minute walk to get to your unit."

The first phase of housing is expected to be completed by 2021.