Agriculture officials in California and other states issued warnings about unsolicited shipments of foreign seeds and advised people not to plant them.
WPVI
By George Solis 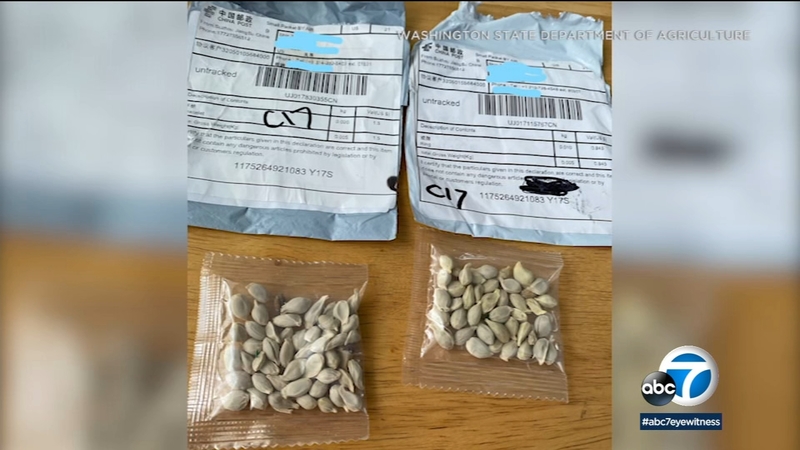 Agriculture agencies in multiple states, including in California, are on high alert after mysterious, unsolicited packets of seeds possibly being shipped from China were delivered around the U.S.

According to the O-C Register, the seeds have mailed to some people in Southern California.

The newspaper says the California Department of Agriculture is aware of the packets, and state officials warn anyone who might have received the seeds to not plant them as they could be harmful to plants and livestock.

Agriculture officials in other states issued warnings Monday about the seeds.

RELATED: How the agriculture industry is dealing with COVID-19

The Department of Agriculture is investigating, saying they believe the packages are part of a "brushing scam" in which people receive unsolicited items from a seller who then posts fake reviews to boost sales.

"Please hold onto the seeds and packaging, including the mailing label, until someone from your State department of agriculture or APHIS contacts you with further instructions. Do not plant seeds from unknown origins," the United States Department of Agriculture said in a written statement.

The Delaware Department of Agriculture says they received several reports over the weekend. Meanwhile, residents in Pennsylvania told Action News, Eyewitness News' sister station in Philadelphia, that they also received the seeds.

The packages apparently contain a type of seed packet either alone, with jewelry or another inexpensive item.

Jason Marcellus from North Coventry Township, Pennsylvania, said his wife randomly received one of those packages.

“I thought something might have been up when I saw this”

"Even though it says stud earring, you take it out, you actually get a little pack of these random seeds," said Marcellus. "My wife had posted something online about having received it and other people have received the same type things. So, I guess it's something that has been going around the area."

Marcellus said the package came with little to no information about the seller.
Authorities believe the packages are part of a scam.

"It is believed that these shipments are part of a brushing scam where shippers send out low-cost items at their own expense in order to rank higher on e-commerce sites. Brushing helps the seller create a more legitimate appearance to their profiles," said the Delaware Department of Agriculture.

RELATED: Bay Area farm teams up with customers in recipe for success during COVID-19 pandemic

"Seeds sold in Pennsylvania are rigorously tested to ensure that they are genetically pure and regulated to ensure that what's on the label is what's in the package," Agriculture Secretary Russell Redding said. "Planting seeds without knowing what they are can wreak havoc with our environment, destroy agricultural crops and incur costly control efforts for years to come."

Anyone who has received a package with seeds is asked to report the shipment to the Smuggling Interdiction and Trade Compliance Program (SITC) by calling the Smuggling Hotline at 1-800-877-3835.