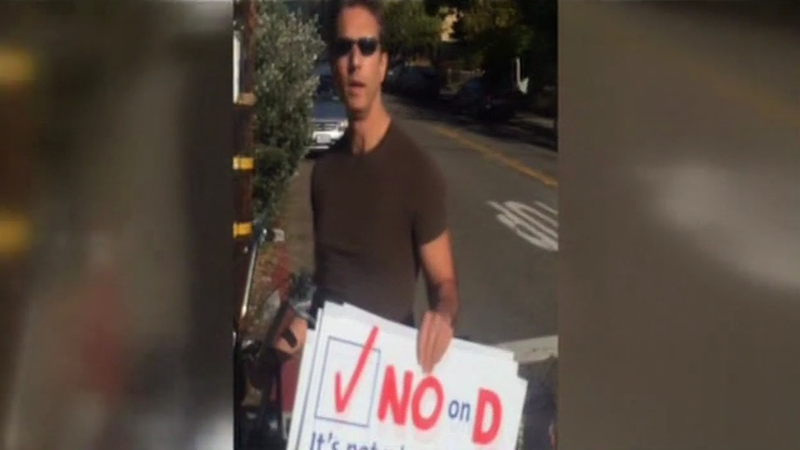 BERKELEY, Calif. (KGO) -- With a month to go before the election, the campaign over a proposed soda tax in Berkeley has turned nasty. Signs that oppose the tax have been taken down. One incident led to a heated confrontation that was caught on video.

The issue is the campaign signs that people say have been disappearing at an alarming rate, so they decided to investigate by taking cellphone video. They did catch some people apparently taking the signs, but the other side says those people having nothing to do with them.

It's supposed to be about whether Berkeley should impose a soda tax, but lately Measure D has devolved into a battle over lawn signs. That's according to the field director for the No On Measure D campaign who shot videos with his cellphone, showing people taking down the no signs from various traffic circles in town.

Cain says he decided to record those taking down the signs after they kept disappearing. "All together we've had a few hundred between posters and signs go missing, so we put some up to see if we can catch some folks and within a few minutes of putting up our lawn signs, we caught a few folks stealing them on video," he said.

"None of our staff or people working on the campaign, as far as we know are involved in taking down any signs in Berkeley," Yes on Measure D campaign spokesperson Martin Bourque said.

The Yes On D measure campaign staunchly denies any involvement in removing the oppositions's placards and even sent an email to supporters reminding them its hands off.

"What I've seen in those videos is residents cleaning up their neighborhoods and they don't like those signs being placed illegally on public property and they've taken them down of their own free will," Bourque said.

ABC7 News spoke with a man who said he doesn't have a position for or against measure D. He just considered the signs a blight in his neighborhood and wanted them gone.