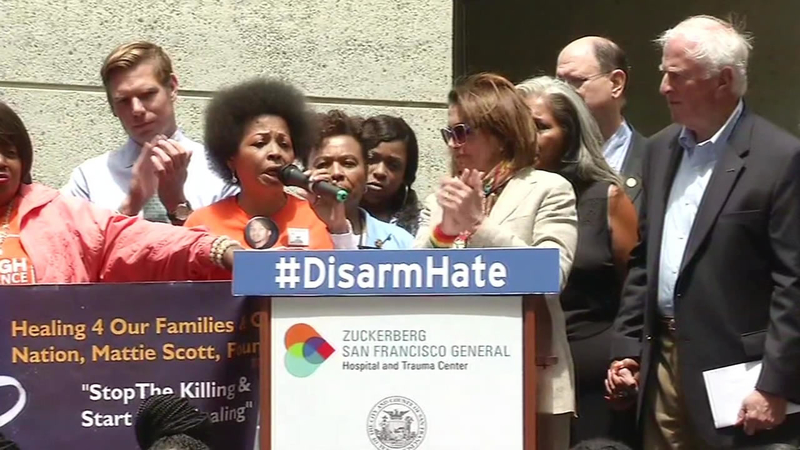 SAN FRANCISCO (KGO) -- A week after Democrats in congress held a sit-in on the house floor, there was another sit-in and this one including places across the country including San Francisco General Hospital.

Some members of congress are hoping to rally the public in favor of stricter gun laws.

Lee was among those who took to social media during the Democrats all-night sit-in at the capitol.

Rep. Eric Swalwell streamed it on Periscope. "I thought: 'You know what? We're already sitting down, why not break another rule and take out Twitter and Facebook Live and Snapchat and invite the American people in,"' he said.

Now, the Democrats want to use social media to help grow a movement.

They're asking Republicans for a vote on stricter background checks, and keeping people on the TSA's no fly list from buying a gun.

But even here in the Bay Area, there's another side to the argument as those who believe no fly no buy isn't the answer to safer streets.

"There's 3-year-old kids just 1.5 years old that are on the no fly list. How did they get on there? Because it's not being managed correctly," Bay Area Firearms Training Group spokesperson Scott Jackson said.

Firearms instructor Scott Jackson would support a training requirement and restrictions based on medical history.

"Columbine, Sandy Hook, Virginia tech, every single one of those kids were on anti-depressants," Jackson said.

But he said the no-fly list isn't governed by due process. You can get on it without ever being found guilty.

"Making a person into a criminal when you have no proof that they're a criminal," Jackson said.

House Democrats do have other ideas in the works, some using technology.

"Why shouldn't a gun be authenticated with a thumb print the way the iPhone is," Silicon Valley investor Ron Conway said.