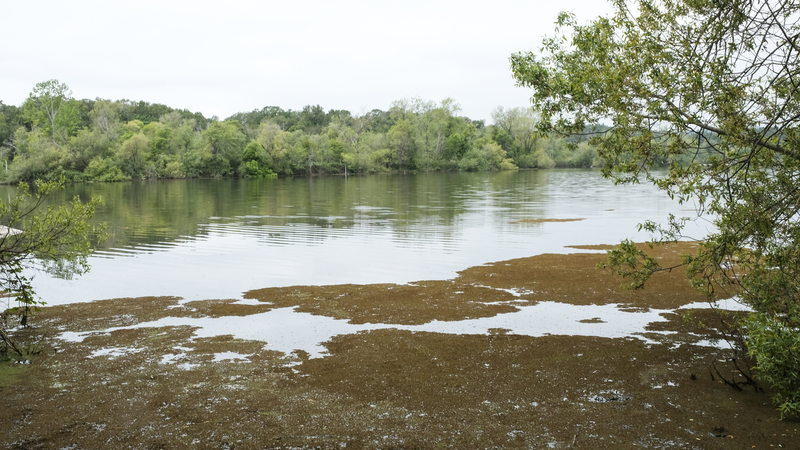 SANTA ROSA, Calif. (KGO) -- At Spring Lake in Sonoma County, there is a not-so-subtle contrast this year between the wildlife and life running wild.

"Much shrup! It's a mucky muck!" exclaimed a small child as she wielded murky weeds dangling from the end of a stick.

"It is definitely noticeable and it has spread," observed one hiker.

Spring has sprung atop #Sonoma County's Spring Lake. Aquatic Azolla weed has taken over sections of shoreline here, and on other lakes, as well. Not harmful. Just unsightly. #abc7now pic.twitter.com/XPechdo7oK

"Last week, there was a strip of it crossing the lake," said another.

They're describing Azolla, a native plant now clogging shorelines and extending into the lake. Melanie Parker, who manages resources for the Sonoma County Regional Parks, told us the weed is having a banner year.

"We have Azolla in every pond or lake in Sonoma County at some level," she said.

#Sonoma County has not traced an exact cause, but this may be related to post-fire runoff in areas blanketed by retardant, which includes fertilizer. Could be another source...perhaps even a byproduct of smoke. #abc7now Azolla weed growths may linger through the summer. pic.twitter.com/jSetQRji09

"Not to this degree."

Azolla appears every year, but rarely so much of it, if ever. For whatever reason, the lake's water has more nutrients this year. The cause may trace back to last fall, when planes blanketed this region with orange fire retardant, which also contains fertilizer to help grass regrow. Some of that fertilizer may have worked its way into the runoff.

"It is possible. I won't rule it out," said Parker, who cited other possible environmental factors ranging from water temperature, to depth, to sediment. Whatever the reason, Azolla is neither dangerous nor permanent. In fact, Azolla is edible in some parts of the world.

Tell that to worried mothers watching kids play with it on the ends of sticks.