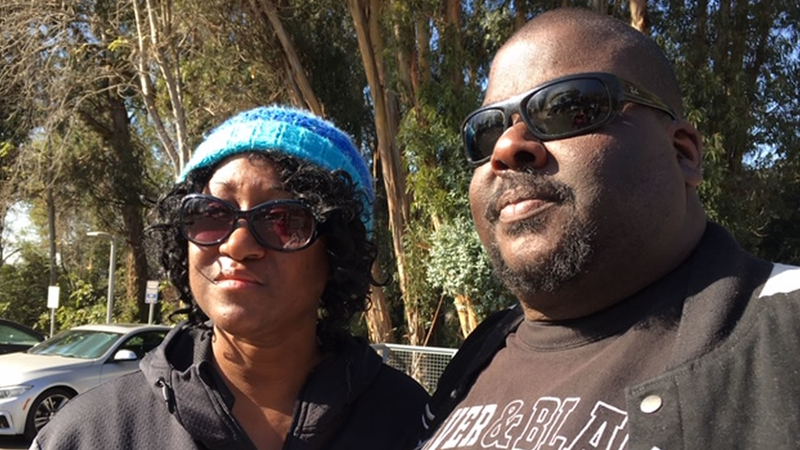 HAYWARD, Calif. (KGO) -- The family of the man who died trying to prevent a theft on BART says they don't understand why no one else on the train jumped to his aid, including BART police, before he was fatally stabbed.

"He didn't need to die like that," said Gary Williams, the younger brother of Oliver Tyrone Hodges Williams, who was stabbed to death with his own knife on a BART train as it approached the South Hayward station Tuesday afternoon.

#DEVELOPING Family of man stabbed to death on @SFBART upset that no one apparently came to the aid of Oliver Tyrone Hodges Williams on train, not other passengers or police in time. Stabbing becomes focus of public comment at BART Board meeting https://t.co/yynjmy0WUy #abc7now pic.twitter.com/F7J7h8bsJB

"He was the one who kept our family together," said Williams, through his tears. "He always told people to make sure you tell them you love them before you hang up the phone, because you never know when you're not going to see them again."

"My heart is truly broken over this," said Williams sister Joyce Higgins. "I'm broken over this. It breaks my heart that this happens on BART trains and there's no police patrolling these things."

BART confirms that the fight between Williams and suspect Jermaine Brim was first reported to them as the train left the Hayward Station, and that officers responded one stop later at South Hayward. By then, Williams was fatally wounded with his own knife. Police confirm that he tried to intervene when the shoeless Brim allegedly tried to steal the shoes from another sleeping passenger.

BART interim Police Chief Ed Alvarez confirms that Brim was a "walk away" from San Leandro Hospital earlier that morning, but could not say for sure that Brim was there on a psychological or 5150 hold.

#BREAKING Brother of man killed on @SFBART train talks about his loss, says Oliver “Tyrone” Hodges Williams was the glue of the family...kept everyone together. #abc7now Stabbing becomes focus of public comment at BART Board meeting (@amy.hollyfield) https://t.co/yynjmy0WUy pic.twitter.com/ogzQeo7ZuE