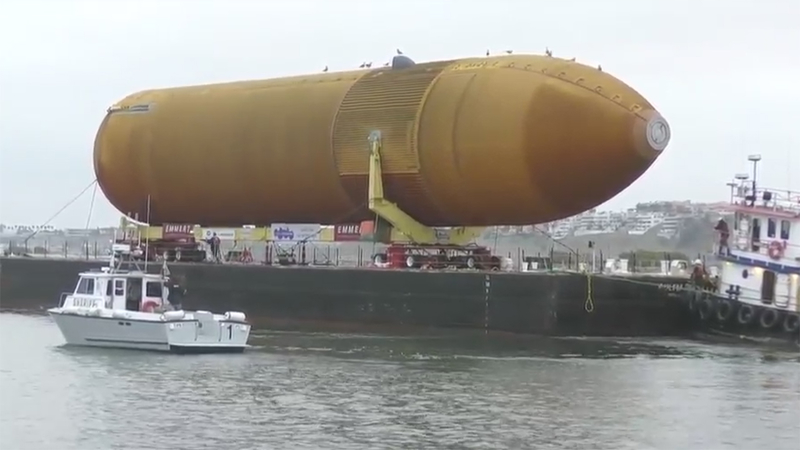 A small fireboat sprayed water in a salute as tugs slowly hauled the barge up the yacht harbor's main channel around 6 a.m.

On Saturday, it will begin a several-hour long journey weaving through city streets en route to the California Science Center in Exposition Park.

When the 66,000-pound external fuel tank reaches its destination, it will join the space shuttle Endeavor, which made a similar journey in 2012.

ET-94 started its 5,000 mile journey from New Orleans on April 10, making its way through the Panama Canal to the West Coast.

Last week, the crew of the tugboat pulling ET-94 helped rescue four fishermen who had to abandon their sinking boat off the coast of Baja California.

Saturday's 13- to 18-hour trek through Los Angeles is scheduled to begin before dawn. The caravan will travel down Lincoln and Culver boulevards, to Westchester Parkway, then through Inglewood on Arbor Vitae Street to La Brea Avenue, past the Forum, and north on Vermont Avenue to the museum.

Since the tank isn't as wide or as high as Endeavor, trees won't need to be cut down and fewer utilities will be impacted.

"We used a system called a 3D scan of the route and that gave us the exact height of all the cables and then we had to go by and figure out who owned those cables," Nate Miranda with the California Science Center said.

The tank will become the second of three components needed to build a full stack replica for Endeavor's final display, upright, in the launch position.

"I started following the space program in 1948, when they first started shooting off rockets after World War II, and I've watched it ever since. It's important from the standpoint of having seen it develop all the way to where it is now," a spectator told Eyewitness News.