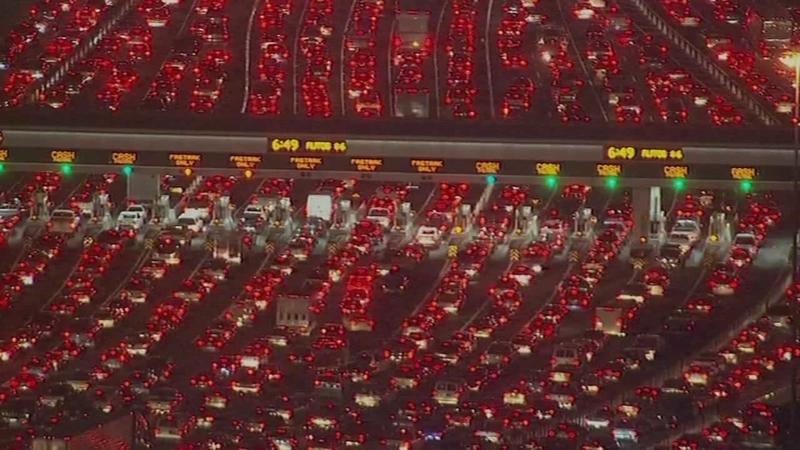 SAN FRANCISCO (KGO) -- One wrong move by a driver resulted in thousands of people being stuck in slow, stop-n-go traffic on the Bay Bridge Friday morning headed into San Francisco.

"It's just a mess when anything like this happens on the bridge," CHP Lt. Diana Johnson said.

A pickup truck carrying 5-gallon buckets of epoxy lost his load and 35 to 40 buckets fell onto Interstate 80, just past the Fremont Street off ramp before 4 a.m.

The CHP had to shut down all but one lane. Some cars drove through it before officials got there and got the goop on their cars.

One wrong move by a driver resulted in thousands of people being stuck in slow, stop-n-go traffic on the Bay Bridge Friday morning headed into San Francisco.

"It was a tremendous mess. There was many gallons of an epoxy-like paste substance that spilled on the roadway," Johnson said.

They first thought it was paint but then noticed it had a grainy texture to it. They swept it up but then worried about spinouts on the gravelly substance, so they sprinkled sand on it.

About that time it started drizzling, creating a slurry of epoxy, sand and rain that covered up the lane stripes.

But Caltrans said that was all they could do at the time, knowing that all these people needed to get through.

They reopened the lanes around 6:45 a.m. but by then, the commute was wrecked.

"It would have been horrendous. I would have been totally frustrated if I had to drive in," Alameda resident Ryan Paglia said. He caught the news in time and decided to avoid the bridge and take the ferry.

The driver was cited for not securing his load and Caltrans plans to file a claim with his insurance company to charge them for the cleanup.

All lanes open on WB Bay Bridge. Here's what waiting for you- a slurry of paint, sand and rain. And no lane stripes. pic.twitter.com/KFF9ZoHtqq

They're done sweeping the Bay Bridge! Now they are laying down sand to avoid spin outs. MIGHT open before 7:30. pic.twitter.com/PerlxXSJFA

Sweeper on scene at the Bay Brudge mess- a good sign! CHP Ofc. here hoping to open up in an hour- just an estimate. pic.twitter.com/N89otdT8sB

Back up on the Bay Bridge right now. Debris on the road around the Fremont exit. pic.twitter.com/DBeDtwdLoz

#BREAKING: CHP estimates it will take two hours to clean paint spill on WB. I-80 in SF. https://t.co/buk87gQ8Ed pic.twitter.com/lX6bMw5wgK