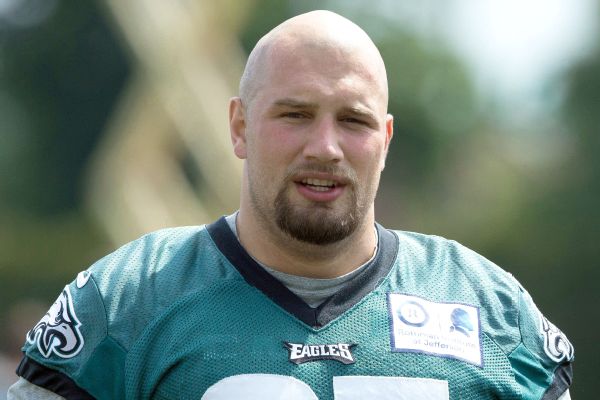 "We're very disappointed that Lane Johnson has been suspended 10 games. His actions have affected the entire organization," Eagles vice president Howie Roseman said in a statement. "We are all working under a clearly-defined set of rules and regulations set forth by the NFL in the collective bargaining agreement with the NFLPA.

"Moving forward, he has no choice but to hold himself accountable to Jeffrey Lurie, Coach [Doug] Pederson and his staff, his teammates, and to the entire organization and our fans. When he returns from suspension, we will continue to support him and welcome him back to the team. We are moving on with our preparations for this week's game in Washington."

Johnson, who has criticized the NFLPA regarding supplement use, had been eligible to play through the appeals process. He had a hearing last week at the NFL's New York office.

The suspension begins immediately. He will be eligible to return to the Eagles' active roster on Dec. 19 following the team's game against the Baltimore Ravens.

"We are disappointed with Arbitrator James Carter's summary ruling," Johnson's attorney Steve Zashin said. "We will wait for his formal written opinion. After we review that decision, we will consider all available legal options."

The Eagles plan to start rookie Halapoulivaati Vaitai at right tackle against the Redskins this week.

The Eagles drafted Johnson, a 303-pound tackle from Oklahoma, with the No. 4 pick in the 2013 NFL draft.He signed a five-year, $56 million contract in the offseason that included a $10 million signing bonus and $35.5 million guaranteed. His base salary for this season is $675,000, so he has to forfeit $421,875. The suspension also nullifies his guaranteed money.

Johnson was suspended for four games in 2014 after he tested positive for a banned substance. Johnson said he had taken a prescribed medication without checking with the Eagles' medical staff.