2021 MLB playoffs: Our predictions from the wild-card games through the World Series 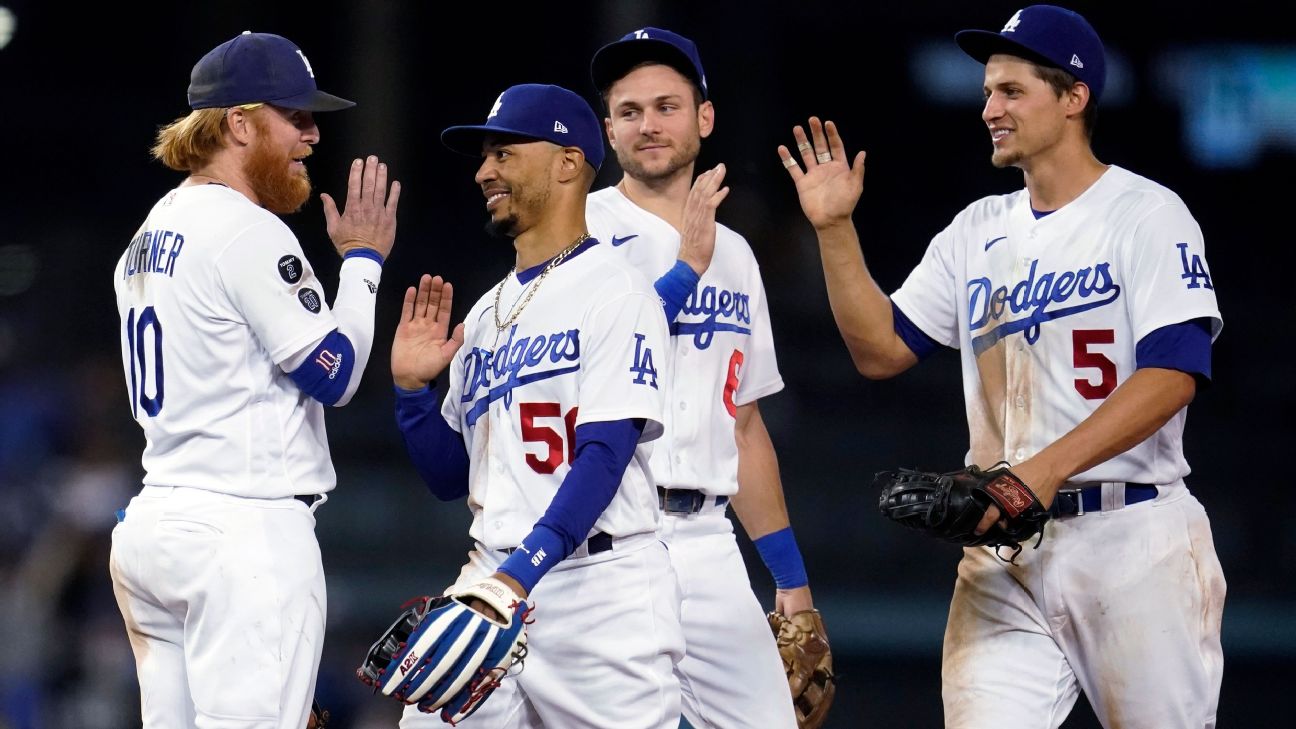 The San Francisco Giants enter October with Major League Baseball's best record, while their rivals in the National League West, theLos Angeles Dodgers, have hopes of becoming baseball's first repeat champions since the New York Yankees won three straight from 1998 to 2000. Meanwhile, the Tampa Bay Rays have some unfinished business in the American League after falling to L.A. in last year's Fall Classic -- and now we know they'll face the Boston Red Sox, who defeated the Yankees in the postseason opener Tuesday, in their division series.


Who will win each round? And which squad will be the last standing at the end of the postseason? We asked more than 30 of our MLB experts -- from ESPN.com, TV, Stats & Information and more -- to give us their predictions: wild-card winners, division series winners, league championship series winners and World Series champion.

The Astros are the popular pick here -- why do you think the White Sox can advance?The White Sox boast one of the most talented teams in baseball. With Luis Robert and Eloy Jimenez out for large stretches, the team didn't have its full-strength lineup for much of this season. The White Sox present a formidable group of pitchers with Lance Lynn and Lucas Giolito joined by surprising performers Carlos Rodon and Dylan Cease. And finally, the bullpen featuring Craig Kimbrel, Garrett Crochet and Michael Kopech is built for the postseason.-- Joon Lee


San Francisco and Los Angeles have the two best records in baseball -- why did you take the Giants to beat the Dodgers? The Giants are the best team in baseball. They have excelled through pitching by reaching manager Gabe Kapler's goals of gaining count leverage, having a low walk rate and winning strike one. But home runs matter. And they have hit the most in the NL while giving up the fewest in all of baseball. They strike quickly and neutralize their opponent from doing the same. They have a winning formula, and all season long it has worked against everyone. Even the Dodgers. -- Doug Glanville

The Astros and Rays were split among our voters -- why do you think Houston will win the American League? The lineup is as lethal as any other in the sport, and though their pitching staff leaves something to be desired, the emergence of younger arms such as Framber Valdez, Jose Urquidy andLuis Garciagives Astros manager Dusty Baker the flexibility to get creative. Not to be discounted: The core of this group is battle-tested and motivated to prove something.-- Alden Gonzalez

While the two NL West teams are our picks, the Brewers weren't too far behind. Why did you take Milwaukee to come out of the National League?The hardest-to-hit trio in the major leagues will carry the day. Corbin Burnes finished with a 2.43 ERA, just seven home runs in 167 innings and a .201 batting average allowed. Brandon Woodruff had a 2.56 ERA and .200 average allowed. Unheralded Freddy Peralta had a 2.81 ERA and a .165 average allowed. Burnes and Peralta averaged more than 12 K's per nine innings, with Woodruff checking in at a meager 10.6. Good luck, opposing hitters. Pitching and defense -- no team is better up the middle with Willy Adames, Kolten Wong and Lorenzo Cain -- and just enough offense is a recipe that will deliver the Brewers the first World Series in franchise history.-- David Schoenfield

A Dodgers repeat is our most popular pick. Why did you go with Los Angeles here?It's risky to bet on a team to go all the way that's in a wild-card game and will be without its most productive position player for a bit. That would worry me if it wasn't the defending champ that -- by a large margin -- 1) allowed the fewest runs in the league and 2) had the best run differential, while falling one game short of the best record in all of baseball. Bet on the best horse, especially when it has the best rotation in the game.-- Kiley McDaniel

The addition of Max Scherzer and Trea Turner at the trade deadline will be the difference. Scherzer joined a pitching staff that was already terrific, it finished the season with a batting average against of .207, the second-lowest in history to the 1968 Indians (.206). Dominant pitching wins in October. -- Tim Kurkjian

And why did you pick the Rays to win their first title this October?Many people watching these postseason games probably couldn't even name a single pitcher on the Rays' roster, but let's face it, this was a 100-win team in spite of that, and it's because Tampa Bay's scheme is rock solid. Maybe in a year in which workloads were such a worry for every team, the team to pick is the one that pretty much mixed and matched its entire season and never needs to worry about such follies as "workloads." -- Tristan Cockcroft

The Yankees are the overwhelming pick here -- why did you take them?I like the Yankees' hot right-handed hitters -- especially Aaron Judge and Giancarlo Stanton, but you might also add Gleyber Torres to that list -- at Fenway Park. I like Gerrit Cole in the starting pitcher matchup against Nathan Eovaldi, and I like the more defined back of the Yankees' bullpen. New York has also played as well on the road as at home this season, both by record and run differential.-- Bradford Doolittle