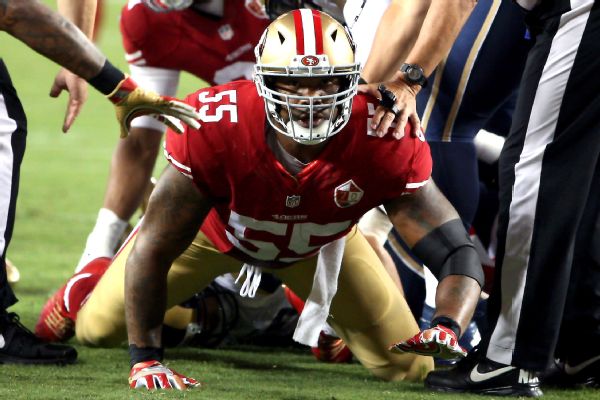 The Niners announced the release of linebacker Ahmad Brooks, who has spent the past nine seasons of an 11-year career in San Francisco, on Friday afternoon. Before releasing Brooks, the Niners sought out a trade partner but could not find a taker.

Brooks departs San Francisco third on the list for most sacks in franchise history with 51.5, making Niners coach Kyle Shanahan's conversation with Brooks on Friday morning a difficult one.

"It was something that was real hard to do," Shanahan said. "I never really knew Ahmad until I got here, had a lot of respect for him over his career and he's been great for me since I got here. I really enjoyed him as a person. When you have a guy who has meant as much to this organization, just looking it up, to be third in sacks all time for the San Francisco 49ers is a pretty big deal.

"To be third all time, it shows the type of career Ahmad has had here and I know some of the defenses he's been on. ... I did think it was a bigger deal than usual. Ahmad handled it like a pro. He was great talking to him and I wish him nothing but the best."

Brooks had been battling third-year pro Eli Harold for the team's starting SAM linebacker job throughout training camp with Harold emerging recently on the first-team defense. Brooks started the preseason opener against the Kansas City Chiefs, but Harold got his opportunity last week against the Denver Broncos.

Upon releasing Brooks, the 49ers will erase a $6.1 million salary-cap figure for 2017, though the Niners already have the most cap space in the league and this move is more about going in a different direction at the position. Harold, who at 23 is a decade younger than Brooks, is scheduled to count only $823,000 against this year's cap.

That the 49ers are moving on from Brooks isn't a surprise, though the timing was considering that coordinator Robert Saleh had just said Thursday that the battle isn't "even close to done yet." Shanahan said making the move now was done out of respect for Brooks.

"Doing it right now was just what the best thing was for Ahmad," Shanahan said. "It was a real tough decision. [General manager] John [Lynch] and I had gone back and forth with it the last few days. Once we really came to the conclusion he wasn't going to be a part of our final 53, we weren't going to keep him around just to let him know nine days from now. We know there's a lot of teams that will be interested in him so we gave him that opportunity to go out and find one."

Brooks was set to enter the final year of his contract after at least tying for the team lead in sacks in each of the past four seasons. In addition to the sacks, Brooks had 325 tackles, 11 forced fumbles and three interceptions in 120 games with the 49ers.

Shanahan confirmed that Harold is now the starter with options like Dekoda Watson available to serve as a backup. For Harold, the opportunity to step into Brooks' job is bittersweet.

"It feels no different," Harold said. "Each and every day is a day to get better. I'm just sad that I lost a guy I really cared about, grew up watching, went to the same school and from the same state [Virginia]. He's taught me a whole lot and I was very fortunate coming to a team that had him and Aldon Smith. It's sad to lose a guy like Ahmad."
Report a correction or typo
Related topics:
sportsespnsan francisco 49ersahmad brooksdekoda watsonnfleli haroldaldon smith
Copyright © 2020 ESPN Internet Ventures. All rights reserved.
More Videos
From CNN Newsource affiliates
TOP STORIES