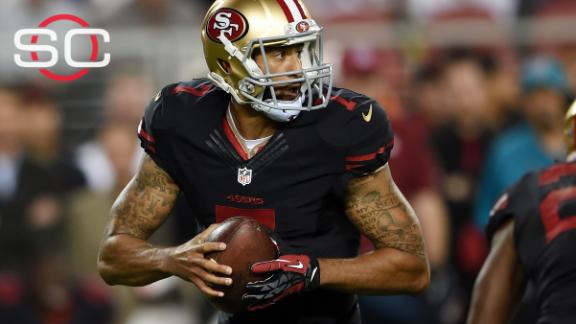 PITTSBURGH -- The way Jim Tomsula sees it, he inherited a fully loaded quarterback when accepting the 49ers job in January.

"He's got a skill set, we just want to utilize his skill set."

Kaepernick completed 17-of-26 passes for 165 yards and rushed for 41 rushing yards in Monday's 20-3 win over Minnesota on Monday. More importantly, Kaepernick looked poised and patient, throwing first instead of his past tendency to take off.

Tomsula made a point to commend Kaepernick's intelligence.

"He's a really smart guy, by the way," Tomsula said. "He was an AP student in high school, very smart, and really impressive that way in meeting rooms."

The Steelers obviously feel Kaepernick is a threat, employing backup quarterback Michael Vick -- one of the best running quarterbacks of all time -- to simulate Kaepernick's rushing ability for the defense in this week's practices.

Linebacker Lawrence Timmons said the defense won't see the simulation until the Wednesday afternoon practice session, but the Steelers are eager to face a running threat like the 49ers, which can play off the Kaepernick-Carlos Hyde dynamic. Hyde exploded for 168 yards and two touchdowns against the Vikings.

"We have to be aware of his feet," said Timmons about Kaepernick. "We definitely have to keep him contained. Can't let him break the pocket and get outside and just fly to the ball. [This] is the type of offense we look forward to. We're the Steelers, we're looking forward to rising to the occasion. That's what great teams do."