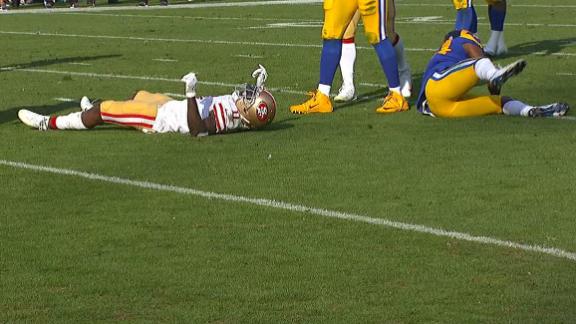 But Staley heard it and immediately rushed to Goodwin's side and began calling for the Niners' medical personnel from the sideline. Goodwin had suffered a concussion that would end his game and his season, but in the moment, the injury seemed much more serious.

"It was scary," Staley said. "I heard the hit initially, then I ran over there and I saw his arms kind of seizing up and his eyes were closed. It was just scary. I didn't see it. I just heard it and kind of saw the aftermath."

Goodwin was taken to a local hospital for what the Niners called a "precautionary evaluation," but it didn't take long for Goodwin to get some positive news and return to the LA Coliseum. San Francisco coach Kyle Shanahan said after the game that Goodwin's tests showed no damage beyond the concussion and that he would be able to fly home with the team.

Goodwin even visited the locker room after the 49ers' 34-13 victory to the delight of his teammates.

"We saw him in the locker room after the game -- he's doing well," Staley said. "He's smiling and stuff. Everybody was really excited to see him and give him a hug."

Countess also was injured on the play and is in the concussion protocol, according to the Rams.

With about a minute and a half left in the second quarter, Niners quarterback Jimmy Garoppolo fired a pass over the middle intended for Goodwin, but as Goodwin went for the ball, Countess came in and delivered a hit to Goodwin's head that immediately drew multiple flags for hitting a defenseless receiver.

The hit angered a number of Goodwin's teammates, including Garoppolo.

"Unbelievable the safety did that," Garoppolo said. "It's just not good. It's not good for our sport, it's not good for anybody. Just a dirty play. But it's football -- that happens. Marquise, I haven't seen him yet, but he's as tough as they come and he bounces back from just about everything, so hopefully he'll be all right."

Goodwin remained down on the field as trainers and doctors rushed to his side. After a few minutes, Goodwin was able to sit up on his own, but 49ers trainers kept a hand on the back of his neck to keep it stabilized.

Soon after, a cart came out and Goodwin was able to get on it with the help of the training staff. Safety Adrian Colbert, who grew up in the same Texas town as Goodwin and calls him a cousin, stood close by and held his hand as he was taken to the locker room.

Shanahan said being near Goodwin as he was taken off the field actually reassured him that he'd be OK.

Goodwin, who has a history of concussions, including one suffered in the Oct. 1 game against Arizona, raised his arms multiple times, pounded his chest and waved to the crowd as he was taken to the tunnel on the cart.

After Goodwin departed, the angry 49ers offense stood in the huddle and, according to fullback Kyle Juszczyk, vowed to score on the next play in Goodwin's honor.

Running back Carlos Hyde took a handoff from Garoppolo at the 8-yard line and appeared to have his momentum stopped before his linemen came barreling in from behind and pushed the pile forward.

Soon, Hyde was in the end zone and the Niners had a 20-3 lead that they would not relinquish.

"Guys took that personal," Hyde said. "We all thought that was a nasty hit, uncalled for, unnecessary, so we put it on our shoulders as an offense to finish the game off with a little chip on our shoulder for Marquise, and the next play was a run play. I was pissed off. So, I showed that on that next play with the touchdown. It's just unnecessary and we were pissed off."

Goodwin's injury brought to an end a season filled with adversity. Earlier this season, Goodwin and his wife's son died because of pregnancy complications. Five weeks later, Goodwin's biological father died before a game against the Tennessee Titans. He played in games both weeks and put up big performances each time.

"He's been through so much," Juszczyk said. "I have all the respect in the world for him and I know everybody here does. You would never know it. He just comes into work and works his tail off, shows up on Sundays and had a great season. It's a testament to him as a man."

Goodwin had two catches for 28 yards and a touchdown before suffering the concussion. He ended a breakout 2017 season with a career high in catches (56) and receiving yards (962) to go with two scores.

Goodwin carted off after hit
Marquise Goodwin takes a massive hit from Blake Countess and gets carted off the field. Goodwin would be taken to the hospital for precautionary reasons.
Report a correction or typo
Related topics:
sportsespnsan francisco 49ersmarquise goodwinnflconcussion
Copyright © 2020 ESPN Internet Ventures. All rights reserved.
More Videos
From CNN Newsource affiliates
TOP STORIES