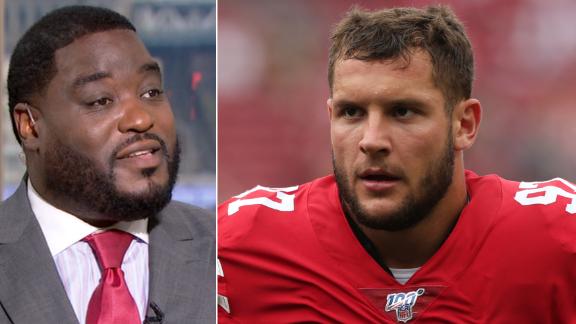 LOS ANGELES -- Sean McVay's first two seasons as the youngest head coach in modern NFL history were almost entirely positive times. His Los Angeles Rams were shockingly good from the start of his tenure, and they steadily improved all the way to the Super Bowl.

McVay is still easily the youngest coach in the league 2 1/2 years later, but the 33-year-old prodigy is finally facing some significant adversity as he matches wits with a former co-worker whose team has already jumped ahead of the Rams in this young season.

Kyle Shanahan was hired by the San Francisco 49ers just 25 days after McVay joined the Rams. McVay's fellow former Redskins assistant took a whole lot longer to get his Niners going, but they're 4-0 heading to the Coliseum to face the Rams (3-2) in an early-season landmark game in the NFC West race.

"We've been fortunate to have some success over the last couple of years, specifically in our division," McVay said. "But every single game represents a chance to rewrite the narrative."

The Rams are on just the second losing streak of McVay's tenure with back-to-back defeats after a shaky 3-0 start. McVay's revolutionary offense has been ordinary for long stretches of Los Angeles' first five games, with unspectacular play by his offensive line and by his star pupil, quarterback Jared Goff.

Almost nothing has gone wrong for Jimmy Garoppolo and the unbeaten 49ers as they begin play in the NFC West, which the Rams have dominated since McVay's arrival.

McVay, Shanahan and their players almost uniformly resist the urge to describe this California derby as anything special. The season is too young and this rivalry is too well mannered for true bad feelings.

If the Niners and Rams stay on top of the game in the coming years, that could change.

"Hopefully we can get that rivalry coming back," Shanahan said. "I know there is a rivalry, but it's been a little bit one-sided. I know we are getting closer. I'm excited about the team that we've got now, and I'm excited to match up on Sunday."

Things to watch in LA:

Niners running back Matt Breida has the speed to be one of the league's most dangerous big-play backs. His 83-yard run on San Francisco's opening play from scrimmage set the tone for last week's win over Cleveland and contributed to Breida's league-best 6.54 yards per carry this season. That success isn't new for the 2017 undrafted free agent, whose 5.22 career average trails only Bo Jackson and Jamaal Charles for the best mark since the merger among running backs with at least 300 carries. Speed is Breida's best attribute: He clocked the fastest speed for a player with the ball this season when he hit 22.3 mph on the run against the Browns, according to the NFL's NextGen stats. Breida had the fastest mark last year as well at 22.09 mph on a 33-yard run at Tampa Bay.

The Rams don't know how much they will use Todd Gurley, who missed their only real practice of the last two weeks Wednesday due to a bruised left thigh . The once-prolific running back's touches already are down sharply this season, and McVay plans to use Malcolm Brown and rookie Darrell Henderson in the backfield against the Niners. Both backups are well regarded, but neither has shown Gurley's athleticism or his versatility in the backfield. The Niners' dominant rushing defense will be a formidable task, particularly for the Rams' up-and-down offensive line.

Along with their two injured starting tackles, the 49ers will be missing another key offensive piece due to versatile fullback Kyle Juszczyk's knee injury. Juszczyk is a key part of the league's most productive running game as a lead blocker. He also provides great support as an extra pass blocker, allowing Garoppolo to hold onto the ball long enough to take some deep shots. He is even dangerous as a receiver with five catches for 71 yards the past two games, making it very difficult for one player to replace everything he does.

Aaron Donald's impact on games hasn't been nearly as tangible this season, with just 13 tackles and one sack through five games of near-constant double teams. But the Rams' two-time AP Defensive Player of the Year usually excels against the Niners. He has seven sacks in his last four games against San Francisco, including four sacks -- one in which he tackled C.J. Beathard by shoving center Weston Richburg into the quarterback -- in a destructive performance last October.

About the only thing that went wrong for the 49ers in last week's win over Cleveland was the field goal kicking. The usually reliable Robbie Gould missed three of his four tries -- one from 52 yards following a low snap from recently signed long snapper Garrison Sanborn -- to match his total misses from his first two seasons in San Francisco. Gould also missed wide right from 47 yards and had a 32-yarder blocked. Gould made 72 of 75 field goals in his previous two seasons with the 49ers for the most accurate two-season stretch in NFL history with at least 50 tries.