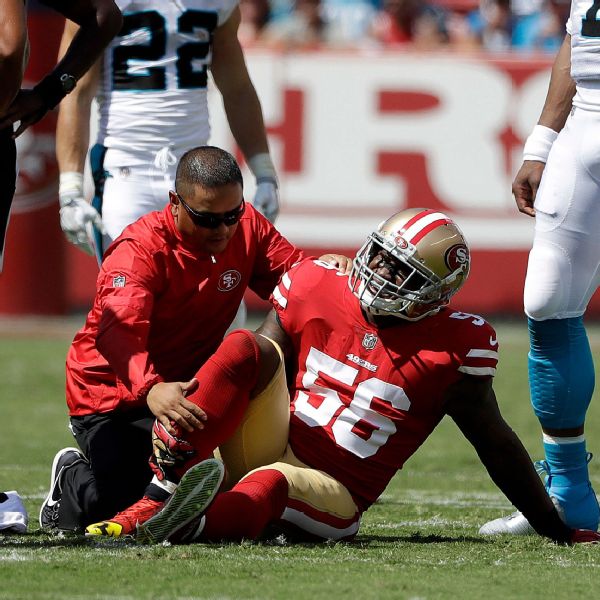 On Monday afternoon, Niners coach Kyle Shanahan revealed that although Foster's injury wasn't as serious as the team first feared, Foster won't be back as quickly as he hoped. Following further tests on the ankle, Shanahan said Foster suffered a high ankle sprain.

The Niners don't have a timetable for Foster's return, but it will take some time for him to get back on the field.

"We don't know exactly with Reuben," Shanahan said. "We'll put him in the boot here for a little bit, but those tend to be a month [or] a little more. I can't put exactly a date on it. [That's] my experience with high ankle sprains."

With 3:33 to go in the opening quarter of Sunday's game, Foster moved toward Carolina running back Christian McCaffrey, but his right foot appeared to catch on the playing surface as he lunged forward.

Foster immediately grabbed for his lower right leg, and Niners medical personnel rushed to him. Foster's teammates huddled around him and fans chanted his name as he was taken off the field by cart. Although the injury was initially announced as a leg ailment and Foster was deemed questionable to return, the diagnosis was later changed to an ankle issue and Foster was declared out for the game.

The Niners conducted X-rays on Foster's ankle and tibia, all of which showed no fracture. He soon returned to the sideline in full uniform and was seen testing the ankle by putting weight on it as a 49ers trainer observed.

Foster lobbied to return to the game, but the Niners declined, and he spent the second half watching from the sideline in uniform without shoulder pads.

"I wanted to get back out there," Foster said. "You know how injuries occur, and as a couple of hours or a couple of minutes pass by, you start getting that feeling back, so you can finish the game. But the Niners being the Niners, they're trying to protect their players."

Before Foster's injury, he had played well on his first 11 regular-season snaps. He posted three tackles, one for loss and a pass breakup that was nearly an interception he likely would have returned for a touchdown.

"He was playing well," Shanahan said. "He was around the ball a ton. He got close to a pick, was near another one, made a good play on the screen right the play before he got hurt. Ripped the ball loose, McCaffrey's knee was down, but he was playing well."

Ray-Ray Armstrong, who has started five games since entering the league in 2013, replaced Foster with the starting defense, a role he figures to handle until Foster is able to return. He finished with six tackles in a performance Shanahan called "solid" on Monday.