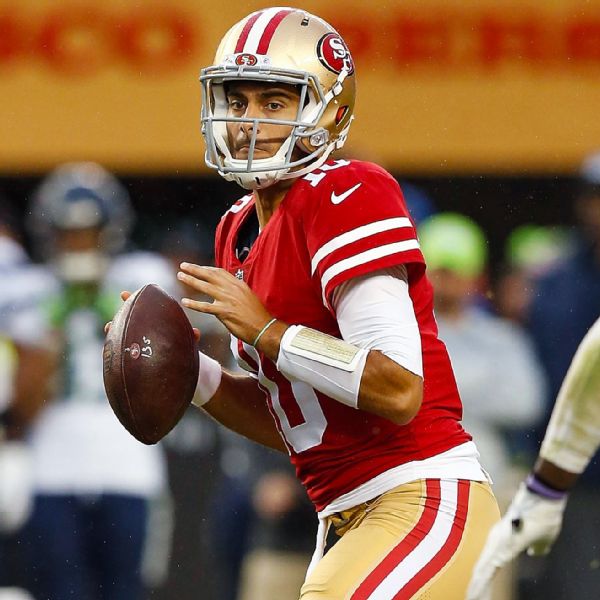 SANTA CLARA, Calif. -- San Francisco 49ers coach Kyle Shanahan has not yet chosen between C.J. Beathard and Jimmy Garoppolo as his starting quarterback this week. But he's close and it might not be a difficult call.

On Monday, Shanahan offered an update on Beathard, whom the first-year coach said is "pretty banged up." During Sunday's loss to theSeattle Seahawks, Beathard suffered a bruise to his left knee and a hip strain, neither of which Shanahan said is considered serious or a long-term injury. Still, it might be enough to prevent Beathard from practicing on Wednesday, leaving Shanahan to turn to Garoppolo.

According to Shanahan, Beathard was sore on Monday. Before making a decision on this week's starter, Shanahan wanted to give Beathard a little more time to recover.

Which means Shanahan is aiming for a decision in the next couple of days.

Beathard departed Sunday's loss with 1:07 remaining after taking a big hit from Seahawks defensive end Michael Bennett. The hit came on a play in which Bennett was flagged for jumping offside, but the officials didn't blow the play dead for Bennett being unabated to the quarterback.

Shanahan also noted that the hit appeared to be out of the target zone in which quarterbacks can be hit while still in the pocket.

"It was pretty violent, right at his knee area," Shanahan said. "I'm sure that jarred something into his hip that went into his whole body. He hit his head pretty hard at the end of it, too. He fell pretty hard.

Garoppolo replaced Beathard to a loud ovation from fans and promptly ran for 4 yards and completed his only two passes for 19 yards, including a touchdown.

That cameo was enough to leave many Niners fans wanting more, but Shanahan did not want to make a quick decision after the game. Since the 49ers acquired Garoppolo on Halloween, Shanahan has preached patience with the formerPatriotsbackup as he learns a new system after 3 years in New England.

"He's gotten better," Shanahan said. "It's still a work in progress and it will continue to be throughout the year."

Shanahan's desire to have a decision made by Wednesday is largely due to him wanting the starter to get the majority of reps in practice this week. That's especially true in the case of Garoppolo, who needs as much work as he can get in an unfamiliar offense.

"It definitely helps, especially when you are dealing with two guys and one is a rookie quarterback and the other one basically is also with him just being here, so to give those guys the best chance to be successful, you want to give them all the reps, which still isn't enough reps," Shanahan said. "Anytime you split the reps evenly it's kind of a disservice to both."

Even if Garoppolo does make his first start in his hometown of Chicago this week and finishes out the season in that role, Shanahan has repeatedly indicated it won't be a referendum on how the team views him for the long term.

In fact, Shanahan drove that point home Monday when he again referenced the Niners likely using the franchise tag on Garoppolo this offseason, as a means to buy both sides more time to get acquainted and have success together.

"I think that's why it makes it easy for us to talk and easy for us to work through," Shanahan said. "I think Jimmy has goals and believes in himself that he can be one of the better quarterbacks in the league, and anyone who feels that way I would assume wants to be paid that way and be paid accordingly. That's very tough to do over six games, five games, four games. I think Jimmy wants his best opportunity to prove that to us, and I'd like to give that to him.

"If that happens over a five-game span, a three-game span, great, let's do it. If it doesn't, no big deal, we can franchise you ... our goal is to get you that next year because if that does happen for you, that means it happens for us, and I think we'll all be happy about that."
Report a correction or typo
Related topics:
sportsespnsan francisco 49ersjimmy garoppolosan francj beathardnfl
Copyright © 2022 ESPN Internet Ventures. All rights reserved.
TOP STORIES
EXCLUSIVE: Woman shoved to ground in Oakland's Chinatown speaks out
Health experts believe Bay Area has already reached omicron peak
Colorado Fire in Monterey Co. now 700 acres, 35% contained
North Bay anti-vaccine activists protest mandates
After the omicron wave, what's next for the COVID pandemic?
Families reflect on the 2 years since 1st COVID case in US
US draws down Ukraine embassy presence as war fears mount
Show More
How to use regular bills to boost your credit scores
VIDEO: Amazon driver comes face to face with bear during delivery
Kansas City Chiefs open as touchdown favorites, Los Angeles Rams 3....
Climate expert says CA may see more unusual winter wildfires
The SF Standard: 'The Curtis Family C-Notes'
More TOP STORIES News