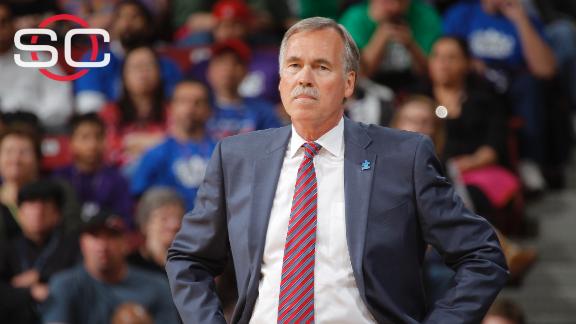 PHILADELPHIA -- If 76ers coach Brett Brown is concerned about his job security now that Philadelphia has hired Mike D'Antoni as associate head coach, he certainly didn't show it Friday.

Brown praised D'Antoni effusively hours after the Sixers announced his hiring, calling the veteran coach "one of the most innovative minds" in recent NBA history. He also made it clear that he's embracing the addition of D'Antoni to his staff.

"He's a hell of a resource and a hell of a coach," Brown said. "I think we're all going to benefit."

D'Antoni joins the beleaguered Sixers on the heels of Brown agreeing Dec. 11 to a two-year extension that will carry him through the 2018-19 season and Jerry Colangelo being named chairman of basketball operations Dec. 7. Colangelo also will serve as an adviser to team ownership.

Brown said he had wanted to add an experienced coach to his staff for some time. But the suggestion to hire D'Antoni came from Colangelo, who has a relationship with the veteran head coach from his time with the Phoenix Suns and USA Basketball.

"We started sharing names, and he mentioned the name Mike D'Antoni. I said, 'Do you think he would do it? That's a hell of a name,'" Brown said. "Less than 24 hours later, he came and said, 'Mike is yours.' And so the speed of it caught me way off guard."

Brown and D'Antoni know one another through Olympic competition.

Brown has coached the Australian men's team and D'Antoni has served as an assistant for Team USA. Brown also coached with the Spurs during D'Antoni's time with the Suns.

The men spent the past two days talking basketball philosophy together.

"I think that we want to have some fun. We want to share ideas," Brown said. "So how can we not step back and say with Jerry Colangelo coming in and Mike D'Antoni coming in, that we got better?"

Brown was asked whether the additions of Colangelo and D'Antoni will be difficult because they both will have a heavy influence on the organization.

"I think because I'm not young anymore I sift [information] well," Brown said. "We do have an abundance of information and qualified, quality people. And then it's on me on how best to use it."

D'Antoni, 64, previously was the head coach of the Nuggets, Suns, Knicks and Lakers but has been out of the game since stepping down from the Lakers after the 2013-14 season. His name has come up in connection with vacancies, including the Nuggets' this past offseason.

He had success as coach of the Suns from 2003 to '08, reaching two Western Conference finals and being named the 2004-05 NBA coach of the year. His high-powered "seven seconds or less" offense revolutionized the game. But he didn't achieve the same results with the Knicks and Lakers.

The Sixers have the worst record in the NBA at 1-27 after a 107-97 loss to theNew York Knickson Friday night. D'Antoni was not in the building for the defeat. He'll join the team during its West Coast trip from Dec. 26 to Jan. 2.

Brown said the Sixers spent several days recruiting D'Antoni. Brown said that at one point, he asked D'Antoni, "Why would you want to come in? We're rebuilding this. What's your motive?"