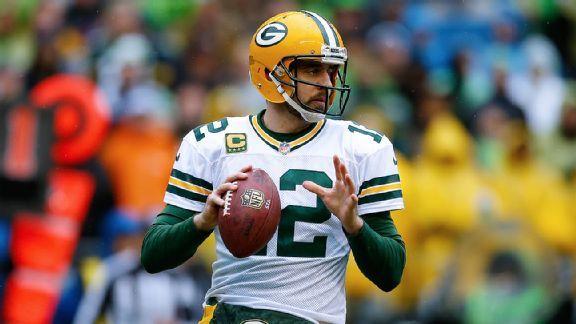 GREEN BAY, Wis. -- Aaron Rodgers says NFL referees take air out of footballs to be used in games, and he doesn't think it should happen.

In fact, the Green Bay Packers quarterback believes there should be a minimum air pressure and no limit to how much game balls are inflated. This comes after reports that the New England Patriots purposely deflated footballs used in Sunday's AFC Championship Game victory over the Indianapolis Colts, a charge the NFL is investigating. It also came before the NFL found that all but one of the Patriots game balls were inflated significantly less than the NFL requires, according to ESPN's Chris Mortensen.

"I have a major problem with the way it goes down, to be honest with you," Rodgers said Tuesday on his ESPN Milwaukee radio show. "The majority of the time, they take air out of the football. I think that, for me, is a disadvantage."

Rodgers said he likes the ball to be inflated because of his strong grip pressure and large hand size but doesn't believe that's the norm.

"The majority of quarterbacks, I would say more than half, are maybe on the other end of the spectrum and like it on the flatter side," he said on his show. "My belief is that there should be a minimum air-pressure requirement but not a maximum. There's no advantage, in my opinion -- we're not kicking the football -- there's no advantage in having a pumped-up football.

"There is, if you don't have strong grip pressure or smaller hands, an advantage to having a flat football, though, because that is easier to throw. So I think that is something they need to look at. There should be a minimum on the air pressure but not a maximum. Every game they're taking air out of the footballs I'm throwing, and I think that's a disadvantage for the way that I like them prepped."

Rodgers credited Denver Broncos quarterback Peyton Manning for lobbying the league to allow game balls to be handled by players before the game. Rodgers said he and the team's equipment staff work together to pick balls they've either practiced with or used in previous games.

Before each game, officials take balls from each team and approve them for use. They are separate from the designated K-balls, used on special-teams plays, which cannot be manipulated.

"The majority of people don't like throwing brand-new footballs, and that's why the change was made and Peyton was big on helping all the quarterbacks out with that," Rodgers said. "But if they're going to let us prep them the way we want them, I don't believe they should be able to take air out of the footballs."