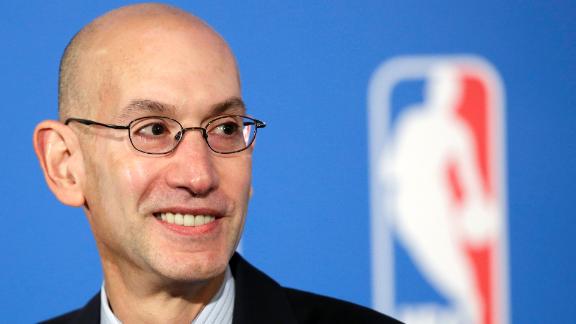 NBA commissioner Adam Silver says the perception of tanking in the league is greater than the reality of it.

"I absolutely don't think any team is trying to lose," Silver said in an interview with ESPN's Andy Katz for "Outside the Lines."

"No player is going out there to lose. In terms of management, I think there's an absolute legitimate rebuilding process that goes on. It's so hard to win in this league, and it's so complex.

"I think what's happened in the case of Philadelphia -- their strategy has been reduced into a tweet. This notion 'be bad to be good.' ... When it gets reduced into a headline, I understand the reaction."

The Sixers (2-23) own the worst record in the NBA and have been considered the team most blatantly tanking in the league.

Philadelphia has acquired talented players with preexisting long-term injuries (Nerlens Noel, Joel Embiid) in each of the past two drafts, almost guaranteeing difficult seasons that result in another trip to the draft lottery while improving the team's chances to land another high draft pick.

Silver said that he's spoken with Sixers management and ownership about the situation. He's also spoken to former Los Angeles Lakers great Magic Johnson, who was quoted a few weeks ago as saying he hoped the Lakers would lose the rest of their games so they could get a great player in the lottery. Johnson later tweeted: "Last years draft there were no superstars. This year there are about 3-4 superstars in college basketball and we need one of them!"

Silver told "Outside the Lines" that "when you sit down with [Sixers general manager] Sam Hinkie, when they lay out the strategy, when you hear about other avenues they've tried, obviously the Andrew Bynum trade -- remember he was only 24 at the time and considered possibly the next great center in the league -- obviously a trade that went very bad and they lost a lot of assets as a result, and it was a huge setback.

"You've got to get into the specifics of every situation, because even in the case of Philadelphia, drafting Joel Embiid who is No. 3 now, they took a player who they knew was injured and was going to be unlikely to contribute on the court this year. Are we all ready to declare that that was a mistake? He may turn out to be the great player of his generation. Two years from now people are going to be saying that was a master stroke that they took him. I would just say that I would only encourage people to get into the complexity of the situation, and when it gets reduced into a headline, I understand the reaction. I think that's a little bit what Magic did, too, and I've talked to him about it. He doesn't really mean it quite that way, either."

The wide-ranging interview, which will re-air in full Sunday at 8 a.m. ET on ESPN2, covered Silver's stance on gambling in sports, political expression by NBA players, the NBA's policy on domestic violence, his relationship with new NBA Players Association director Michele Roberts and conference realignment and competitive balance, among other topics.

Silver said he's "supportive" of players speaking out on issues they care about, although they would "not become billboards during our game for their political standpoints."

"I understood in this circumstance it was unique, and I stood down in essence and allowed it to happen," Silver said. "Ultimately the league is a partnership with our players, and so I talked to Michele Roberts, our new executive director, on a regular basis. I talk directly to our players and I get a sense of things, and I'm also getting advice from others, as well. In this case, I felt it hadn't crossed the line, and these are very fact-specific situations. I'll sort of see when the next situation comes -- and have to make a judgment at that time."

Silver said that he consults with Roberts regularly and their relationship is good. They have publicly clashed on two issues since she took over the players union in August -- the 24-game suspension Silver levied on Charlotte forward Jeff Taylor after he pleaded guilty to domestic violence charges, and her contention that there should be no salary cap or maximum salaries in the NBA.

Roberts objected to Silver's unprecedented penalty for Taylor and indicated the union would be willing to file a grievance. Taylor elected to accept the punishment, however.

"I think it is critically important that someone, in this case me as the commissioner, be in a position to act quickly and to represent the interests of everyone involved in the league," Silver said of the broad latitude he has to impose penalties for such situations. "At the same time, I accept that there should be a due process check on behalf of the players, and putting myself in the shoes of the players or their union, I'm comfortable with the fact that they have the right to go to a neutral third party."

Silver said the NBA has studied and analyzed how the NFL dealt with its recent cases of domestic abuse involving Ray Rice, Ray McDonald, Adrian Peterson and Greg Hardy among others. He confirmed a Wall Street Journal report that he recently had lunch with embattled NFL commissioner Roger Goodell.

"I was curious to get his inside view on how -- his views of the way they handled the situation, what he might have done differently in hindsight," Silver said. "I don't feel comfortable disclosing anything precisely that was said there, but I would just say Roger has been a really good friend over the years."

Roberts has challenged Silver and the league's owners to do away with the salary cap and maximum contracts.

"I don't know of any space other than the world of sports where there's this notion that we will artificially deflate what someone's able to make, just because," Roberts told ESPN the Magazine. "It's incredibly un-American. My DNA is offended by it."

Roberts also suggested she would push for much more than a 50-50 split of basketball-related income when the players have the ability to opt out of the league's collective bargaining agreement after the 2016-17 season. The NBA recently announced a new nine-year, $24 billion TV deal beginning in 2016, which will noticeably increase player salaries and each team's salary cap.

Silver told "Outside the Lines" he believes the owners and players negotiated "the right split" of basketball-related income in the last collective bargaining agreement. It is currently a sliding scale between 49 and 51 percent. He said he is not yet concerned about a work stoppage in 2017.

"I take everything that Michele Roberts says very seriously," Silver said. "Having said that, we negotiated a 10-year collective bargaining agreement with a six-year out for either side. We're just past the three-year mark, so I think it's premature to be talking about outs. My sense is the league is going really well right now, and I think we have a very fair system. But they are our partners, and to the extent they think it's unfair and we need to then get together and re-examine it, we will. They have the right to do that and we have the obligation to respond."

Silver also said the league is "looking at" conferences amid concerns that the current structure of two, geographically-based conferences might not be the best way to determine an NBA champion anymore. The Eastern Conference has been far weaker, with fewer strong teams, than the Western Conference in the last few seasons.

"Realignment," Silver said, "is something we're looking at."

So, too, is doing away with conferences in the playoffs and just taking the top 16 teams. Silver said the concern with any such architectural changes is travel -- both in the regular season and the playoffs.

"Do you really want to see Miami playing Portland in the first round, and all those multiple cross-country trips?" he said. "I think if there was an easy solution, we would have changed it by now."

Silver also expanded on the op-ed piece he wrote in the New York Times advocating for legalization and regulation of sports gambling.

"I wrote that column to try to break the ice a little bit," Silver said. "Whether it's ESPN with Bracketology, whether it's all the lines in every national newspaper, on every web service. My point was there's massive, massive sports betting going on in this country. Estimates are that it's up to $4 billion a year. And my view is if it's going to go on, let's make it transparent, let's bring it into the sunlight, so to speak, and let's regulate it, the same way we do a lot of other industries.

"I'm not coming in as an advocate of sports gambling. I'm trying to be more of a realist to say it's going on in a massive way ... and I think the right course would be therefore to legalize it and regulate it."