Adrian Peterson: Playing for Cowboys 'would be nice' 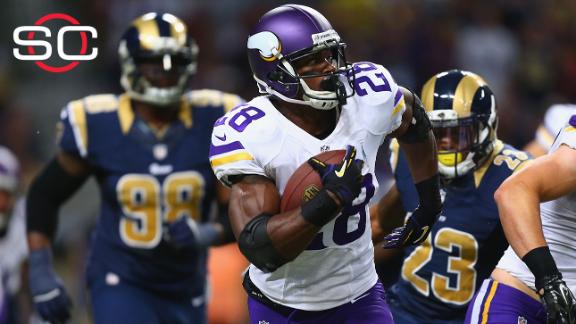 Minnesota Vikings running back Adrian Peterson apparently hasn't ditched his desire to play for the Dallas Cowboys if the opportunity presented itself.

"It would be nice," Peterson told Dallas' WFAA-TV while in attendance for the Houston Rockets' closeout 103-94 victory against the Mavericks on Tuesday night. "I've got family here, my dad's here. But I'm under contract, so we'll see."

Peterson, who attended the game in Houston with his lawyer, Rusty Hardin, is from Palestine, Texas.

Earlier Tuesday, the Vikings reiterated that their position "has not changed" and they have no plans to trade Peterson, general manager Rick Spielman said.

"We can just end the Adrian Peterson stuff," Spielman told reporters at the team's pre-draft news conference. "Our position has not changed. We have no interest in trading Adrian Peterson."

The NFL reinstated Peterson earlier this month from a suspension for a child abuse charge that kept him off the field for all but one game last season. Peterson has three years and $45 million remaining on his contract, but none of that money is guaranteed.