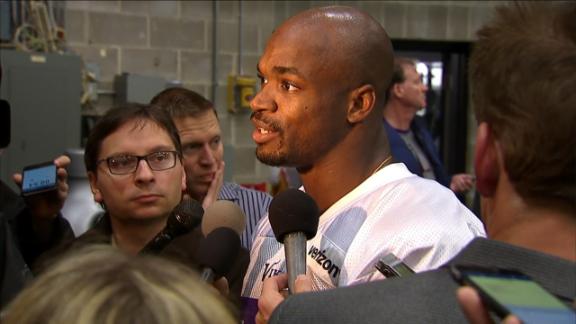 EDEN PRAIRIE, Minn. -- Two days after he said the Minnesota Vikings were outcoached "in so many ways -- and outplayed, too" in a 38-7 loss to the Seahawks, running back Adrian Peterson stood by his comments, while reminding reporters he'd also said he could have done more to change the outcome of the game.

Peterson only got eight carries in the loss -- the fewest he's had in a game where he wasn't hurt -- and said he was frustrated by the lack of opportunities on Sunday. That, he said Tuesday, was the "mindset of a player who wants to be great."

"You want to be able, when your number is called, to make plays," Peterson said. "Of course, I'd be frustrated when you think about eight carries. But we're focusing now on Arizona and trying to get this thing back on the right track."

The Vikings gave Peterson a season-low five carries in the first half, as they fell behind 14-0 and saw their deficit increase to three touchdowns after Teddy Bridgewater's second-quarter interception. The 2012 NFL MVP said there were two carries he could have taken for touchdowns if he'd approached the run differently.

"I addressed how I felt about the situation. That was it," Peterson said. "To me, it's like, I go back and I remember saying this on Sunday, too, but I go back through run plays. We had a kick play that's designed to go outside. I cut it back in. I look at that play and I could have took that to the house. That changed the outcome of the game. We had another outside zone play that I shortened when I should have wrapped it around. That was a higher percentage chance of taking it to the house as well. So I would rather people point that out than things about my carries, because those are opportunities that could have changed the game as well. But I guess that wouldn't cause that much of a ruffle. It just gives people [something] to talk about."

Peterson said he didn't feel a need to meet with coach Mike Zimmer or offensive coordinator Norv Turner to discuss the situation this week, saying his comments after the game summed up his feelings.

"I came in Monday with a smile on my face, ready to roll and thinking about Arizona," he said.

Peterson leads the NFL in rushing with 1,182 yards, but he could have a hard time being productive on Thursday night against the Cardinals' fourth-ranked run defense. Arizona also leads the league in offense, and if the Vikings are without a number of their key defensive players -- nose tackle Linval Joseph, linebacker Anthony Barr and safety Harrison Smith have all missed two days of practice this week -- they could once again find themselves in a game where they need to play from behind.

Asked if he runs harder in those games, knowing his opportunities could be limited if the Vikings fall into a deficit, Peterson said, "I run hard every play. I really just keep doing what I do."

Peterson on carries: 'It is what it is'
Vikings RB Adrian Peterson responds to his comments made after Minnesota's loss to the Seahawks and the amount of carries he received in the game.
Related topics:
sportsespnadrian petersonharrison smithminnesota vikingsoutcoachedlinval josephmike zimmernflnorv turnerteddy bridgewateranthony barr
Copyright © 2022 ESPN Internet Ventures. All rights reserved.
TOP STORIES
Colorado Fire in Monterey Co. now 700 acres, 35% contained
North Bay anti-vaccine activists protest mandates
After the omicron wave, what's next for the COVID pandemic?
Families reflect on the 2 years since 1st COVID case in US
US draws down Ukraine embassy presence as war fears mount
How to use regular bills to boost your credit scores
Kansas City Chiefs open as touchdown favorites, Los Angeles Rams 3....
Show More
Climate expert says CA may see more unusual winter wildfires
The SF Standard: 'The Curtis Family C-Notes'
Family demands justice after 23-year-old woman found dead after date
Tax filing season starts Monday. What to expect for 2022
5 tax changes that can boost your refund this year
More TOP STORIES News