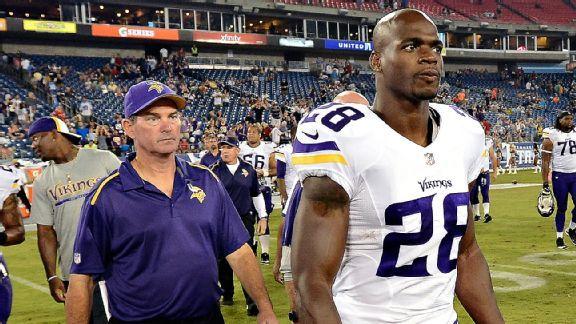 Minnesota Vikings coach Mike Zimmer and general manager Rick Spielman spent more than four hours at Adrian Peterson's home outside Houston on Wednesday afternoon, meeting with the 2012 NFL MVP to discuss his feelings about returning to the Vikings next season.

When contacted by ESPN shortly after the meeting, Peterson said it went well but added that he wished to keep the details private.

"I appreciate Rick [Spielman] and Coach [Mike] Zimmer coming down to see me today. We had a great dialogue and they were able to understand where I was coming from and concerns my family and I still have. We respect each other and hopefully the situation can pan out so that everyone involved is content," Peterson said in a statement released to ESPN's Josina Anderson.

Spielman and Zimmer arrived at Peterson's house around noon Wednesday, meeting with the running back in person for the first time since he was placed on the commissioner's exempt list Sept. 17. Before the meeting was over, Peterson's wife, Ashley, joined them.

Peterson, who missed 15 games in 2014 after he was indicted Sept. 12 on child injury charges for disciplining his 4-year-old son, told ESPN last month he was "still uneasy" about returning to the Vikings, adding that he was unsure how much support he had from the team.

Peterson pleaded no contest to misdemeanor reckless injury Nov. 4, and on Dec. 12 he was suspended until April 15. On Thursday, however, a federal judge ordered the NFL to vacate Peterson's suspension; the league appealed the decision and put Peterson back on the exempt list. The change in his status did allow the Vikings to communicate directly with Peterson for the first time since September, and the team wasted little time in scheduling a face-to-face meeting with the running back.

Minnesota can officially trade Peterson once the new league year starts Tuesday. The Vikings can release him or ask him to restructure his contract at any time. Peterson, who turns 30 on March 21, is scheduled to make $12.75 million in 2015, though the Vikings will have more than $25 million in cap space once their trade of quarterback Matt Cassel becomes official Tuesday.

Neither Zimmer nor Spielman spoke with a group of television crews stationed outside Peterson's home.