After offseason ranching, Cueto back with new-look Giants 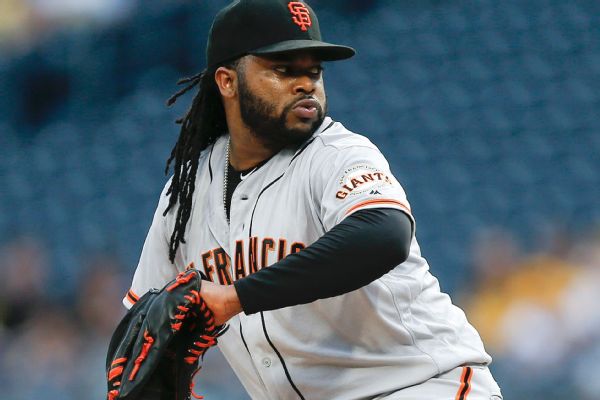 SCOTTSDALE, Ariz. -- Johnny Cueto's offseason included time tending to cows, chickens and goats on his 500-acre ranch back home in the Dominican Republic. And it included a decision to stay with the San Francisco Giants rather than opt out of his contract and give up $89 million in guaranteed money to become a free agent again.

The 31-year-old right-hander missed one-plus months last season with blister-like tenderness in his fingers and a forearm strain, and finished 8-8 with a 4.52 ERA in 25 starts. That was a huge drop from 2016, when he went 18-5 with a 2.79 ERA in his first season after signing a six-year, $130 million deal with San Francisco.

"I never told them anything. They were just thinking that I was going to stay," Cueto said, "and I stayed because I like the team."

San Francisco is coming off a 98-loss season in which both Cueto and ace Madison Bumgarner were hurt, the latter missing three months following a dirt-bike accident. Bumgarner is known to do hard labor on his horse ranch in North Carolina.

"I'm not that kind of cowboy," Cueto said through a translator.

Cueto's arrival at spring training last year was delayed due to his father's health issues. He reported in time for the start of workouts Wednesday.

"It's great to see Johnny wants to continue his career as a Giant," Giants manager Bruce Bochy said. "Considered one of the best starters in the game, we are glad that he will be helping us bounce back in 2018."

"I'm feeling good, thank God, and I'm happy to be back with my teammates," Cueto said. "What can I say? [McCutchen is] a good hitter and you have to respect him and be careful with him. He's a criminal with the bat, as they say.

"We just need to forget about what happened last year. Now we're in 2018 and we have a good team that is united," Cueto added. "I feel like we have a chance to get to the World Series."

LHP Will Smith said he has thrown seven bullpens at 75 percent as he returns from elbow surgery that sidelined him all of last season. Bochy said the reliever's target date for returning to the major leagues is May 1. ... RHP Jose Flores has not reported because of visa issues.
Report a correction or typo
Related topics:
sportsespnmlbsan francisco giantsjohnny cueto
Copyright © 2020 ESPN Internet Ventures. All rights reserved.
More Videos
From CNN Newsource affiliates
TOP STORIES