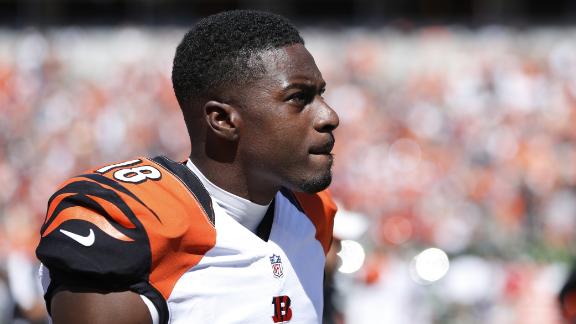 CINCINNATI -- Pro Bowl receiver A.J. Green was carted off at the start of the Cincinnati Bengals' practice Wednesday after aggravating an injury to his right big toe.

During the open portion of the Bengals' practice and moments after the team finished undergoing stretching and plyometrics, Green walked over to the side of the practice fields and took off his right cleat before throwing it hard to the ground and slamming down his helmet, too. He was clearly frustrated with the injury, which dates back to the season opener in Baltimore.

After speaking briefly with coach Marvin Lewis, Green put his shoe back on and got on a green cart with a trainer, who drove him back across the street and into Paul Brown Stadium for immediate observation. As he rode by reporters standing nearby, Green let out an audible sigh.

The fourth-year receiver was listed on the Bengals' injury report later Wednesday with a "great toe" injury. He was listed as having limited practice participation.

When asked about Green's injury as he walked back into the stadium from practice, Lewis smiled and simply said, "We'll see."

Lewis also acknowledged that Green was taken in for observation to his foot.

Offensive coordinator Hue Jackson didn't see Green leave the practice field, but he said he will continue preparing for Sunday's game against the Carolina Panthers as if he has Green in the receiver rotation.

"In my mind, he is going to be able to play until somebody tells me he's not," Jackson said. "I don't look at it like that until I have to. So I'm not worried about that right now. The guys that are out there, we have a game plan that we're installing and putting in for a team that we're playing and we'll get everybody ready to play."

Green previously told reporters that he suffered the injury -- which he called "something like turf toe, but not as bad" -- during the first quarter of the Ravens game. He battled through the pain, though, even catching a 77-yard, go-ahead touchdown that helped give the Bengals the 23-16 Week 1 win. He ended up missing the next game because of the injury, but he came out and caught six passes for 102 yards in the Week 3 win over the Tennessee Titans. He added five catches for 81 yards and a touchdown in the Bengals' 43-17 loss at New England on Sunday night.

Linebacker Vontaze Burfict was back at practice, and in full participation, after missing the last two games with a concussion.