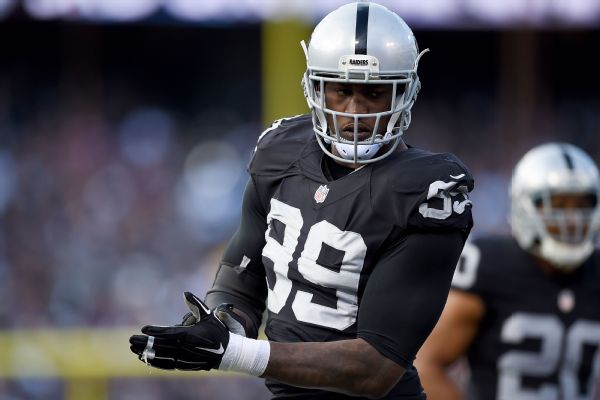 San Francisco police have sought Smith in connection with the incident, but Smith's fiancée -- who told TMZ she was the victim -- said her parents took him to rehab at his request.

"I wish the best for Aldon. And I'm scared for his life with his addiction. I cannot comment on the altercation, but I can tell you I love him and [am] so happy he turned to my family who considers him family, and hopefully he gets the help he truly needs," Smith's fiancée said.

San Francisco police, who identified Smith as a suspect Sunday in a statement, told ESPN on Monday that they still want to speak to him about the incident. Police said the accuser suffered non-life-threatening injuries.

Smith, a first-round pick of the San Francisco 49ers in 2011 and a first-team All Pro in 2012, has had numerous run-ins with the law. He has been arrested on DUI charges multiple times and has previously faced weapon charges, which were later reduced.

Smith played nine games for Oakland in 2015, with seven starts, and had 3.5 sacks. But the NFL, in reaction to his numerous brushes with the law and the league's substance abuse policy, suspended Smith for a year on Nov. 17, 2015, and has yet to reinstate him.

The Raiders did not respond to a request for comment Sunday after police announced they were searching for Smith.
Report a correction or typo
Related topics:
sportsespnnfloakland raidersaldon smith
Copyright © 2020 ESPN Internet Ventures. All rights reserved.
More Videos
From CNN Newsource affiliates
TOP STORIES