Aldon Smith suspension could be cut 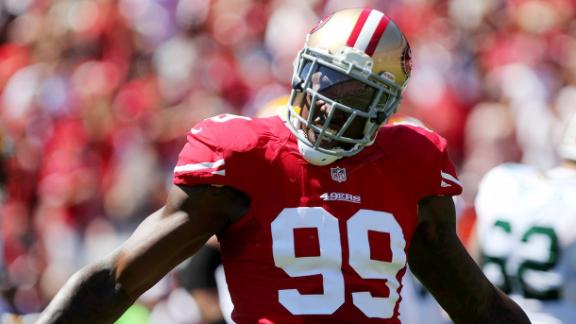 The San Francisco 49ers could get help sooner than expected following this week's bye because outside linebacker Aldon Smith's nine-game suspension could be reduced for good behavior, league sources confirmed Monday.

Smith was suspended before the season by the NFL under terms of the league's personal conduct and substance abuse policies. His nine-game suspension is set to end Nov. 10 after the 49ers play the Saints.

However, sources confirmed an NBC Sports report that Smith's suspension could be reduced by one or two games, which makes it possible he could be available to play in a Week 9 game against the Rams or the Week 10 game against the Saints. He must maintain his good behavior for commissioner Roger Goodell to reduce the penalty.

Under terms of his suspension, the league has allowed Smith to be in the team's facility for meetings and conditioning, although he has not been allowed to practice with the team.

A reduction to Smith's suspension would not set a precedent, as other players, including Ben Roethlisberger and Brandon Marshall, have had similar suspensions reduced.