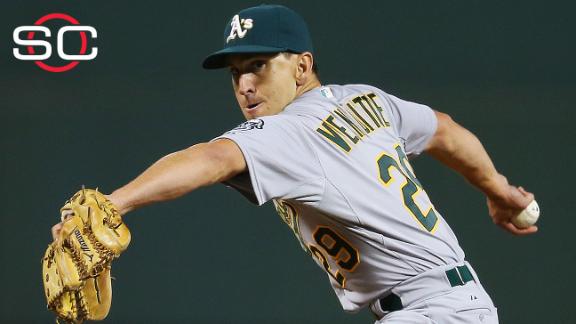 BOSTON -- Switch-pitcher Pat Venditte made his major league debut Friday night after he was called up by the Oakland Athletics before their game against the Boston Red Sox.

And that was more meaningful than being the first pitcher in 20 years to throw with both hands in the same game.

"The most special thing is being here," Venditte said. "It's been such a long journey."

Venditte entered in the seventh inning, with Red Sox organist Josh Kantor playing Joni Mitchell's "Both Sides Now." He had thrown warmup pitches with his right hand, then switched to his left to face lefty Brock Holt.

After Holt grounded out to first, Venditte put his glove on his left hand and pitched to righty Hanley Ramirez, who singled on the second pitch. Then, still pitching with his right arm, he got righty Mike Napoli to ground into an inning-ending double play.

Venditte also pitched a perfect eighth, allowing only Ramirez's hit and no runs with one strikeout in the A's 4-2 loss.

The ambidextrous pitcher, 29, was called up by the A's for his first major league stint since beginning in the minors in 2008.

Fans might stare when Venditte switches his special glove from one hand to the other, depending on the batter. But the Athletics promoted him because he pitched very well this season at Triple-A Nashville.

"There's a little bit of a sideshow to it for good reason," A's manager Bob Melvin said before the game. "But the reason he's here is because he's performed."

Red Sox manager John Farrell was impressed with Venditte's performance, saying, "Our hands are full with one arm. But that was truly amazing to watch tonight.

"To watch Venditte, it's a remarkable thing to see what one person's body is capable of doing. The coordination, even the guys on deck were remarking this is a very unique thing, a very cool thing, really."

In 17 outings (16 in relief) this season in the minor leagues, Venditte was 1-0 with a 1.36 ERA and held opponents to a .167 batting average. In eight minor league seasons, the first seven in the New York Yankees' organization, he had a 2.37 ERA with 52 saves and nine starts.

The last time a pitcher threw with both hands in a major league game was Sept. 28, 1995, when Greg Harris did it with the Montreal Expos. It was the next-to-last game of a career in which he appeared in 703, and he is the only pitcher in the modern era to do that.

In an interesting coincidence, Harris also pitched parts of six seasons (1989-94) with the Red Sox, but the general manager at the time, Lou Gorman, refused to let him throw with both hands, saying he would make "a mockery of the game."

Said Harris at the time: "Boston is so conservative. People are afraid to try anything."

In a silent act of defiance, Harris usually chose to wear an ambidextrous glove on the mound.

Oakland catcher Stephen Vogt faced Venditte in the minors about five years ago.

"It's a sight to see, and he's very good both ways," Vogt said. "When we signed him I was excited because I want to see what it's like to catch a guy like that. He's kind of got the same stuff from both sides. So whether it's a right-handed hitter or a left-handed hitter, you call the game accordingly. It's fun to see."

"I faced him a bunch of times in the minors, and I didn't have very good success," he said. "Facing him so many times, I would have put him in the big leagues a long time ago."

Venditte's goal is to help the team win. And if his uniqueness stands out, he doesn't mind.

"Whatever attention comes with it is fine, but we're here to win games," he said. "It doesn't matter if I'm pitching with both hands or one. It's one effort."

Venditte has the matchup edge, throwing left-handed to lefties and right-handed to righties, except when he's facing a switch-hitter. In that case, the rule states he must decide which arm he's throwing with and the batter adjusts to that. He rarely, if ever, changes throwing arms within the same at-bat.

"He told me when he was with the Yankees in Triple-A that if his pitch count was too high left-handed they would have him just throw the rest right-handed to conserve his arm for the next day," Oakland bullpen coach Scott Emerson said.

Venditte arrived at Fenway Park just after the first pitch.

"It's a little bit of a novelty," Melvin said. "You're curious to see if this really is functional, and all he did in spring training is perform for us. I think he only had one or two outings where he even gave up runs and he's been doing the same thing in Triple-A."

Venditte was 3 when he began using both hands. He's a natural right-hander, so he worked hard to become effective from the left side. He has thrown with both well enough to reach the majors.

"I can't even fathom how somebody can do that," Melvin said. "It's tough enough to perform at this level throwing on one side let alone two."

Pitching coach Curt Young had a succinct description: "It's just a gift."

In other moves Friday, the Athletics optioned right-hander Dan Otero to Nashville and moved Coco Crisp to the 60-day disabled list with a neck injury.

ESPNBoston.com's Gordon Edes and The Associated Press contributed to this report. 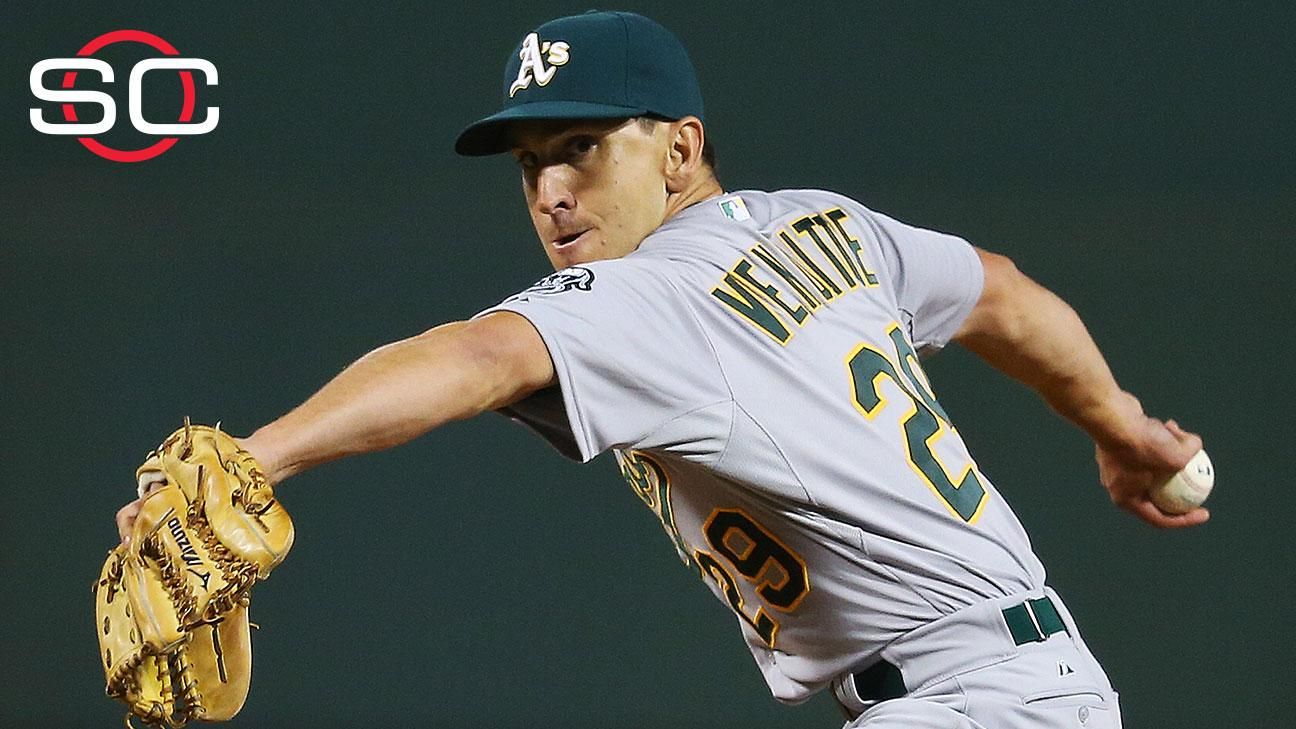 Venditte gets outs lefty and righty
Athletics pitcher Pat Venditte becomes the first pitcher since 1995 to record outs pitching left-handed and right-handed in the same game. 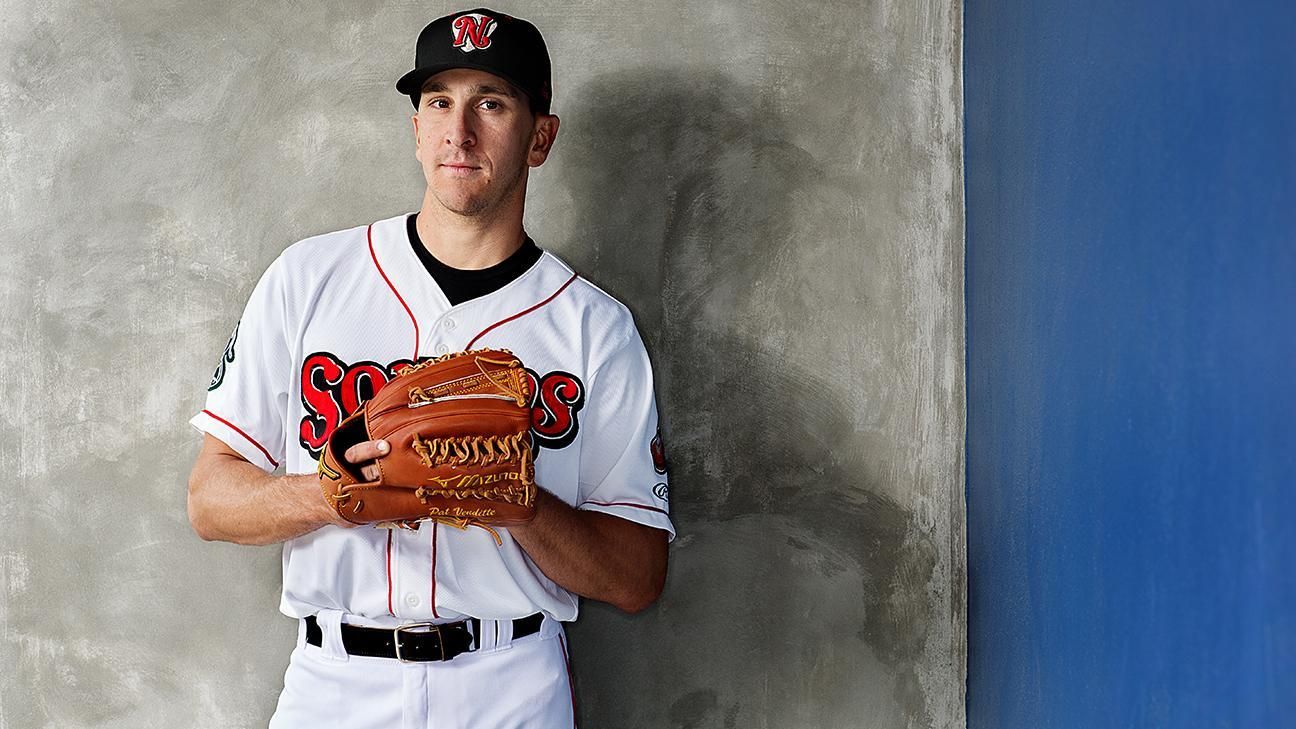 E:60 Pat Venditte
Pat Venditte has been pitching with his left and right hand since the age of 3 and is now a minor leaguer in the Athletics organization. In this excerpt from a 2009 E:60 feature, find out how the intriguing prospect learned his unique skill set.
Related topics:
sportsespnrelief pitcherbullpenswitch pitcheroakland athleticsexposambidextrousmlbpat venditte
Copyright © 2020 ESPN Internet Ventures. All rights reserved.
More Videos
From CNN Newsource affiliates
TOP STORIES
'Park Fire' burning east of Morgan Hill prompts evacuations