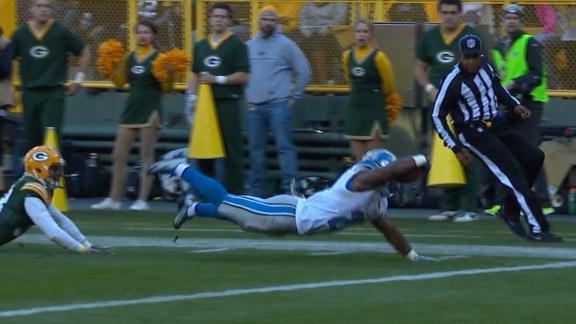 GREEN BAY, Wis. -- Ameer Abdullah tied an NFL record Sunday afternoon -- and it is one that could be tough to top.

Abdullah returned the second-half kickoff 104 yards for the Detroit Lions and was stopped one yard from scoring, tying the 104-yard kick return by Percy Harvin in 2011 as the longest non-scoring play in NFL history.

Abdullah didn't know he tied a record until a reporter told him after the game in the locker room.

Abdullah said the return happened just how the Lions drew it up, but he slowed down toward the end of the return.

"That sparked a good start to the second half," Abdullah said. "From that point on, we felt we could really dictate the game."

Entering Sunday's game against the Green Bay Packers, Abdullah averaged 28.21 yards per return for the Lions.