American Pharoah one win from Triple Crown after Preakness win 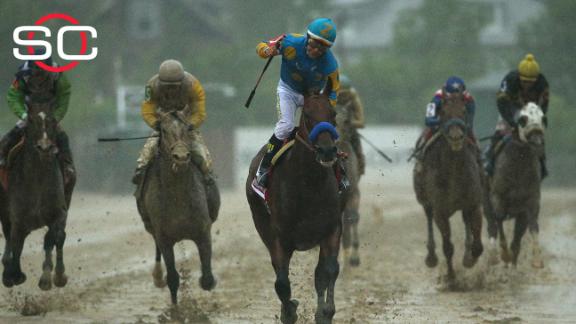 BALTIMORE -- Minutes before the Preakness, it was an ominous scene at Pimlico Race Course. Thunder and lightning. Wind and rain. A record crowd scrambling for cover. A drenched racetrack.

Nothing -- absolutely nothing -- was going to stop American Pharoah, especially the competition.

"Great horses do great things," Baffert said after his sixth Preakness victory, "and he showed that today. He's just an incredible horse."

In three weeks, the stage will be set for the ultimate drama in horse racing -- a Triple Crown attempt at the Belmont Stakes in New York.

"I don't even want to think about the Triple Crown right now," the 62-year-old trainer said. "I want to enjoy this. It's tough up there."

American Pharoah, who started from the rail under Victor Espinoza, will be the 14th Derby-Preakness winner to have a shot at the Triple Crown at the Belmont since Affirmed in 1978.

For Baffert, he'll be making an unprecedented fourth attempt at a Triple Crown. He won the Derby and Preakness with Silver Charm in 1997, Real Quiet in 1998 and War Emblem in 2002. All three fell short in the Belmont.

At the Wynn racebook in Las Vegas, American Pharoah opened as a minus-120 favorite to win the Belmont and the Triple Crown and even money not to.

American Pharoah was the third Preakness favorite to start from the rail since 1950. No horse had won starting there since 1994.

A rainstorm began about 15 minutes before the race, preceded by several lightning bolts, but it didn't affect American Pharoah, a sweet-striding 3-year-old. The colt dealt with similar conditions in winning the Rebel Stakes in March.

Part of the record crowd of 131,680 may have missed the race as they fled the infield and huddled under tents.

No matter. The result was not a surprise.

The dominating win confirmed owner Ahmed Zayat's belief that American Pharoah is a champion in the making.

"I always told everybody American Pharoah would show up today," said Zayat, drenched after his trip to the winner's circle. "Indeed he did. He is the real deal."

American Pharoah may have only half a tail and sensitive ears that Baffert stuffs with cotton, but he's pretty close to perfection. Bought back at auction by Zayat for $300,000, American Pharoah earned $900,000 for the victory to boost his winnings to $3.7 million.

A Triple Crown is priceless.

"He put on a show today," said Zayat, a businessman from Egypt who lives in Teaneck, New Jersey. "Nobody came close to him."

He added: "The sport without star is not a sport."

Baffert, who was unhappy American Pharoah drew the inside post, was concerned when the rains came.

"That was crazy," Baffert said. "These horses, I could tell they didn't like it when they got pelted like that. I was worried about the cotton balls in his ears. What if they're getting soaking wet?"

Espinoza has his chance at history, too. Although his horse in the previous race was scratched when it reared up in the starting gate and fell, Espinoza remained unfazed.

In fact, he became the first jockey to have a third try at a Triple Crown. The 42-year-old rider from Mexico won the Derby and Preakness with War Emblem in 2002 and California Chrome last year, falling short in the Belmont both times.

"I hope the third one is the charm," Espinoza said.

American Pharoah broke a step slow before Espinoza hustled him to the lead. He then fended off a brief bid from Mr. Z, while American Pharoah's stablemate Dortmund and Derby runner-up Firing Line were never factors.

Simon Callaghan, who trains Firing Line, said the horse lost his chance when he stumbled a stride out of the gate.

"That took his momentum, and then he never really got hold of the track," Callaghan said.

American Pharoah heads into the 1-mile Belmont with a six-race winning streak. His margin of victory in the Preakness was the largest since Smarty Jones won by a record 11 lengths in 2004. It matched the sixth-largest margin in Preakness history.

Tale of Verve was a distant second, followed by Divining Rod, Dortmund, Mr. Z, Danzig Moon, Firing Line and Bodhisattva. The winning time for the 1 3/16 miles was 1:58.46.

"It went very well," Espinoza said. "He bounced out of there. He broke a little tiny bit slow, and I pushed him to the front."

Stuck in eighth place at the half-pole, Tale of Verve rallied to finish second.

"What a horse," trainer Dallas Stewart said. "I think this validated what he is. He's an improving horse."

Stewart felt so good about it that he seemed eager to take on American Pharoah again in three weeks, when the Belmont, also known as the Test of the Champion, looms.

Ron Turcotte, who rode Secretariat to the 1973 Triple Crown, is pulling for a new member to join the club.

"There is no denying American Pharoah was impressive today and we should all savor his performance," Turcotte said in a statement. "The sport needs a Triple Crown winner and he could very well be the one."