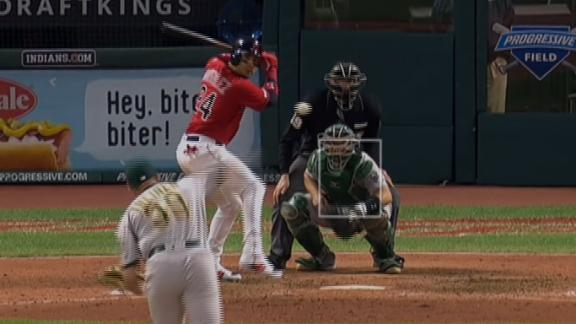 CLEVELAND -- Brett Anderson had a quick reaction when the baseball and both pieces of a broken bat came sailing at him in the fifth inning.

Get out of the way.

Oakland's left-hander managed to do that, but left the game in the following inning with a cervical strain, and the Athletics hung on to beat the Cleveland Indians 6-4 on Monday.

Anderson (5-3) allowed one run in 5 1/3 innings, improving to 4-0 with a 0.94 ERA in six starts against the Indians. The 31-year-old left-hander was injured in the fifth inning when he ducked to avoid a ball hit up the middle by Roberto Perez. Anderson also had to watch the bat, which broke when Perez made contact.

Anderson has had arm injuries throughout his career, including being sidelined twice last season.

"Kind of another fluky thing where I only have to deal with when I break a guy's bat and I don't know where the barrel is going," he said.

Anderson finished the inning, then was removed in the sixth with a 3-1 lead and a runner on second. He is dealing with soreness and stiffness, but said he should be fine going forward.

"My range of motion going to the inside part of the plate was limited," he said. "It was one of those things where I can get out of it when it's not too bad. I felt that was the right moment."

Manager Bob Melvin and a team trainer visited the mound in both the fifth and sixth, and Anderson walked to the dugout on the second occasion.

"He's all right," Melvin said. "When the bat broke and went back over him, he kind of snapped his neck a little bit so we will see how he is tomorrow. Up to that point he was really good."

Jurickson Profar, Matt Olson and Matt Chapman homered as Oakland extended its winning streak to four, matching its season high. The A's have won seven of their last 10 games against the Indians.

Jose Ramirez hit an RBI single in the eighth off Lou Trivino that pulled Cleveland to 4-3, and Blake Treinen retired Carlos Gonzalez on an inning-ending groundout with the bases loaded.

Chapman hit a two-run homer off Tyler Clippard in the ninth. Francisco Lindor had a two-out homer in the bottom half, and Treinen retired Jason Kipnis on a groundout for his eighth save in 10 chances.

Profar's homer in the second was the first run Carrasco allowed in 13 innings.

Indians: RHP Corey Kluber will have an X-ray on his broken right arm Thursday. He was hit by a line drive May 1. Kluber's arm has been in a cast, which could be fitted with a removable splint depending on the results of the X-ray.

Carrasco was coming off two dominant performances against the Chicago White Sox, but admitted he didn't have his best stuff Monday. The right-hander knew his high pitch count would lead to a short outing.

"I wanted to go deep in the game so we wouldn't have to use our bullpen too much," he said. "I started worrying when I saw like 70 pitches in the third inning."

In addition to hitting a home run, Chapman took a hit away from Kipnis at third with a backhand grab in the first and added a couple of other solid defensive plays.

"You hit it to third, you're out," Indians manager Terry Francona said. "That kid's special."

Oakland could have a five-game winning streak, but their contest in Detroit on Sunday was suspended due to rain with the Athletics leading 5-3 going into the bottom of the seventh. The game will resume Sept. 6 before the Tigers play a series in Oakland

Athletics: RHP Chris Bassitt (2-1 1.93 ERA) has the AL's third-lowest ERA among pitchers with 30 or more innings. Bassitt is a Toledo native and played at the University of Akron.

Indians: RHP Trevor Bauer (4-2, 3.76 ERA) got a no-decision against Baltimore in his last start, but allowed seven runs -- matching a career high -- in five innings.

Cleveland leaves bases loaded in the 8th
Cleveland leaves bases loaded as their 8th-inning rally is stymied after Carlos Gonzalez grounds out for the final out of the inning.
Report a correction or typo
Related topics:
sportsespncleveland indiansoakland athleticsmlb
Copyright © 2020 ESPN Internet Ventures. All rights reserved.
More Videos
From CNN Newsource affiliates
TOP STORIES
Some churches wait on CA order to reopen, others to resume in-person service regardless