Andrew McCutchen: Right field at AT&T is like 'another center field' 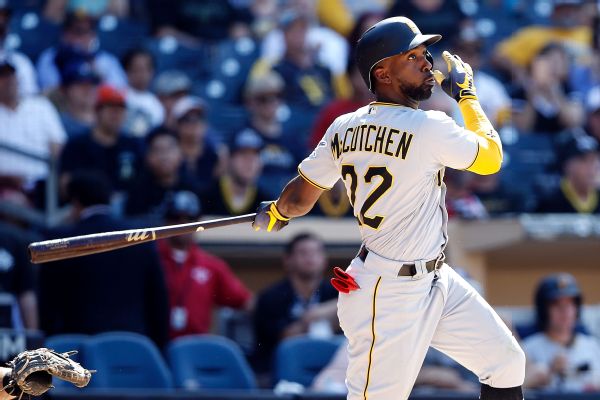 Running catches, ricochets off the wall, tricky bounces and all.

And if he can save his legs a little bit from the action in center, he might just steal a few more bases.

The Giants acquired the popular McCutchen from Pittsburgh on Monday, and he will be their new starting right fielder. Manager Bruce Bochy quickly spoke to incumbent Hunter Pence about making the move from right to left.

"I'm looking forward to right field. That's one place people can't pick on me, saying my defensive metrics are so bad," McCutchen said during a conference call Tuesday. "I know there's a lot of room out there to run. It's definitely going to be a reminder, almost like playing center. I've gotten to see Hunter Pence patrol out there quite a bit, so I'll be able to pick his brain quite a bit to learn where to play and how to play, all those things."

McCutchen, the 2013 NL MVP, said he thinks he will be more comfortable leaving Pittsburgh to join a clubhouse that has many franchise faces -- that's what he was for so long, after all -- such as Madison Bumgarner and Buster Posey. He joins new third baseman Evan Longoria, acquired from Tampa Bay last month.

Still, this will be a big move for a player beloved in Pittsburgh. McCutchen took the opportunity again Tuesday to thank the organization that selected him in the first round of the 2005 amateur draft for "having faith in me that I could be the player that they felt that I could be."

"There are a lot of emotions that, of course, come along with this. I was there for nine seasons. You're going to have those emotions," McCutchen said. "A lot has happened. To put it all in a nutshell, we have a lot to be excited about, and we have also a lot to be thankful for."

McCutchen has played at least 153 games in each of the past three seasons, batting .279 with 28 home runs and 88 RBIs in 156 games last year. But he has not been an All-Star since 2015, when he was selected for the fifth straight season.

He will join a new-look lineup that includes Longoria, and Bochy is counting on both players to be steady run producers.

"It's nice to have these two names to pencil in there," Bochy said.

McCutchen, 31, is entering the final season of a $51.5 million, six-year contract he signed in March 2012, a deal that turned into a bargain as he became a star and powered Pittsburgh's turnaround.

While McCutchen said he initially disliked the idea of moving from center to right, because he still felt he could amply do the job, he is eager for a new challenge.

"Now that I'm going into the Giants organization, this is something that they want me to do, I'm all for it. This is where I want to be," he said. "San Francisco is a very huge field, bigger than PNC Park. You've got Triples Alley. It's called Triples Alley for a reason, because it's big. ... For me it's another center field, I'm just moving over a little bit. I think I'll be running a lot. But if it's saving my legs a little bit so I can get some more stolen bases, I'm all game and I'm all down for it."

Giants general manager Bobby Evans said he wasn't sure the deal would get done.

"As you know by ongoing headlines, this player has been kind of the apple of our eye in the offseason," said Brian Sabean, Giants executive vice president of baseball operations. "It was a dogged pursuit by Bobby and the baseball ops staff with Pittsburgh reciprocating on their end to try to make this trade happen. Lo and behold we were able to make the transaction."

San Francisco will continue to pursue a center fielder, and Evans said, "We feel the options are still pretty large."

McCutchen will prepare for spring training next month in Scottsdale, Arizona, and the chance to start fresh with a franchise that won World Series titles in 2010, '12 and '14.

"I'm just very happy to be a part of this organization, an organization who knows what winning is all about," he said. "I've seen it over the years, played against it for many years, been eliminated by it."
Report a correction or typo
Related topics:
sportsespnmlbcfrfandrew mccutchencenter fieldsan francisco giantsright fieldcutch
Copyright © 2020 ESPN Internet Ventures. All rights reserved.
More Videos
From CNN Newsource affiliates
TOP STORIES