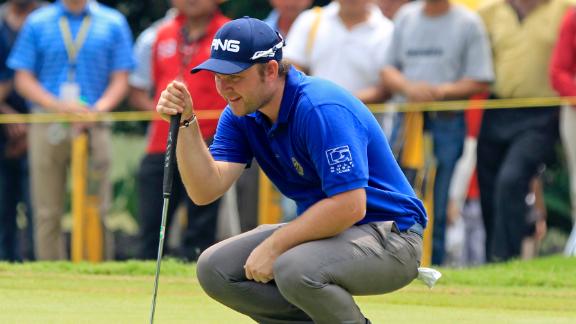 Andy Sullivan leaped to give a high-five after making a hole-in-one on Sunday -- and will soar even higher if he claims the prize for making his ace at the KLM Open in the Netherlands.

Sullivan's hole-in-one came at the 163-yard 15th hole at Kennemer Golf Club, site of the European Tour event where he placed third behind winner Paul Casey.

The ace means he is eligible for a unique prize: a trip to outer space aboard the Lynx Mark 1. Valued at $100,000, the trip was being offered by XCOR Space Expeditions, one of the tournament sponsors.

According to the European Tour, Sullivan had quipped earlier in the week about the possibility of winning the prize: "I'll win a trip home."

Asked afterward by reporters about the feat, Sullivan said he was unsure when he would take the company up on the offer.

"I'll see what the missus says," he said.

XCOR is an Amersterdam-based company that will begin offering trips to space for the public in 2015. The hole-in-one promotion was meant to create awareness of the trips, which the company's website described as part of a "two-seat, piloted transport vehicle [that] will take humans and payloads on a half-hour suborbital flight to 100 km (330,000 feat) and then return to a landing at the takeoff runway.''

Sullivan, 28, is from England and has yet to win on the European Tour. He is ranked 216th in the world.