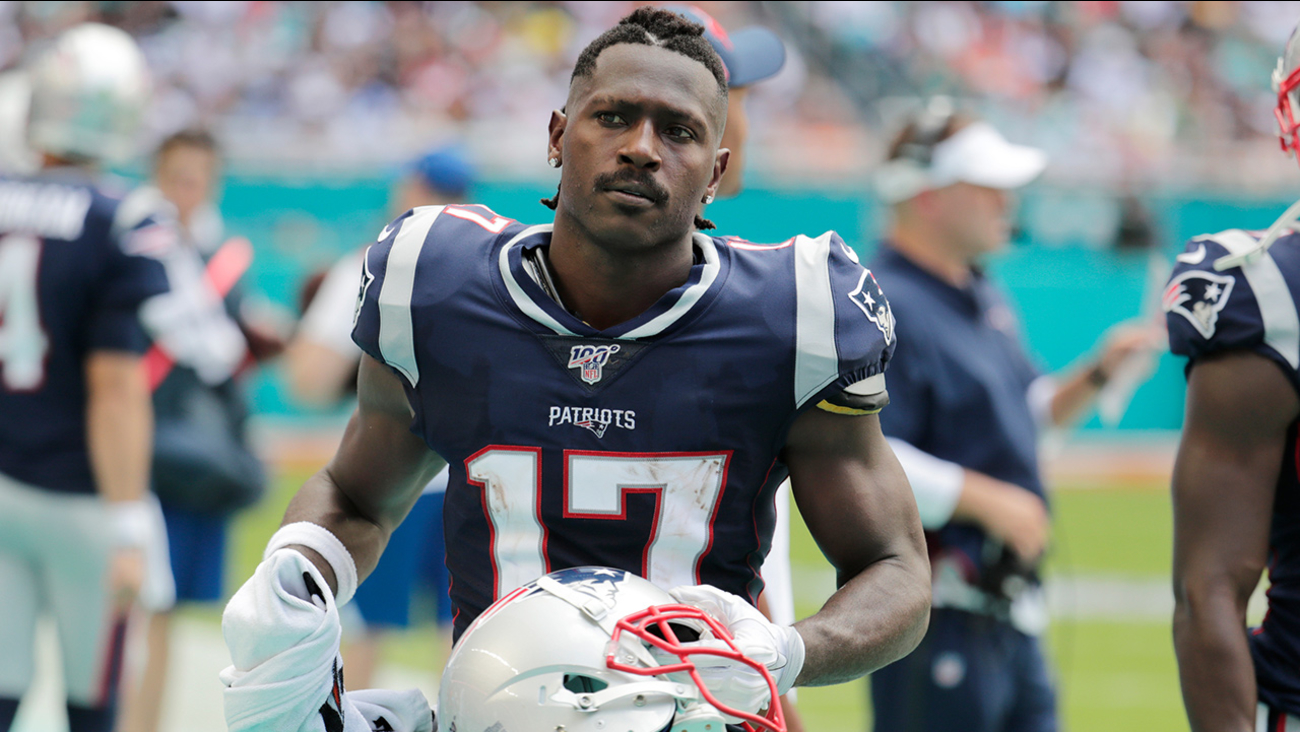 In this Sunday, Sept. 15, 2019, file photo, New England Patriots wide receiver Antonio Brown (17) stands on the sidelines during the first half against the Miami Dolphins. (Lynne Sladky)

TAMPA, Fla. -- Suspended receiver Antonio Brown has agreed to return to the NFL with the Tampa Bay Buccaneers on a one-year deal, according to a person with knowledge of the move.

The person spoke to The Associated Press on condition of anonymity Saturday because the contract had not been completed.

The addition of the volatile seven-time Pro Bowl selection bolsters an already formidable arsenal of playmakers for Tom Brady.

Brown, who's nearing the end of an eight-game suspension for violating the league's personal conduct penalty, is eligible to return in Week 9, when the first-place Bucs (4-2) host the NFC South rival New Orleans Saints.

RELATED: Antonio Brown says he has 'growing up to do,' vows to rebuild trust

Brown, 32, is the latest high-profile addition around Brady, who signed with Tampa Bay in free agency this year after a historic 20-season run in New England that included nine Super Bowl appearances and six titles.

Tight end Rob Gronkowski and running backs Leonard Fournette and LeSean McCoy have also joined Brady in Tampa Bay, which hasn't made the playoffs since 2007.

Brown is reuniting with the 43-year-old quarterback after playing one game with Brady during a brief stint with the Patriots in September 2019.

The 32-year-old's streak with six consecutive seasons with at least 100 catches and 1,000 yards receiving came to a screeching halt when he forced his way out of Pittsburgh and then almost immediately fell out of favor in Oakland, which acquired him in a trade in March 2019.

But with injuries to Evans (ankle), Godwin (hamstring) and Scotty Miller (hamstring/groin) limiting the amount of time Brady has had to work with his top receivers in practice and games, adding Brown provides Brady with another proven playmaker.

Arians was Pittsburgh's offensive coordinator when the Steelers drafted Brown in the sixth round in 2010.

Brown signed with New England after a tumultuous short stay with Oakland ended with the receiver demanding and being granted his release during training camp.

By that time, the Raiders had voided guaranteed money in the receiver's contract after his eventful summer with the team began with Brown, among other things, missing a number of practices because of frost-bitten feet attributed to not wearing proper footwear during a cryotherapy session.

The receiver also tangled with the NFL and threatened to retire if forced to wear a new helmet. He later was fined by the Raiders for what the team said were unexcused absences during camp.

Brown had four receptions for 56 yards and a touchdown in his only game with the Patriots, who split with the receiver because of off-the-field matters that are still under investigation by the league.
Report a correction or typo
Related topics:
sportsfloridanflfootballu.s. & worldtampa bay buccaneers
Copyright © 2021 by The Associated Press. All Rights Reserved.
More Videos
From CNN Newsource affiliates
TOP STORIES