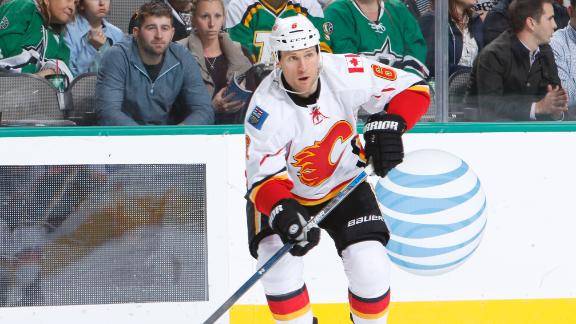 In the first case of its kind in the NHL,Calgary Flames defenseman Dennis Widemanhad his suspension cut from 20 games to just 10 by an independent arbitrator on Friday.

Arbitrator James Oldham concluded the evidence provided by the NHL -- and the decision by commissioner Gary Bettman to uphold Wideman's 20-game suspension for hitting linesman Don Henderson on Jan. 27 -- is not "substantially supported."

In Oldman's opinion, Wideman showed no intent to injure and the arbitrator also took into consideration the player's "11 years of discipline-free performance."

"Wideman did not, in my opinion, 'deliberately strike' Henderson," Oldham wrote in his 18-page opinion. "I do not believe that in his concussed state, Wideman could or should have anticipated that his push would cause Henderson to fall and bang his head against the boards sufficiently hard to put Henderson also in a concussed state."

Wideman has already sat out 19 games after Bettman upheld the 20-game ban on Feb. 17, and he will get back $282,258 of the $564,516 he was going to forfeit as a result of the suspension. He has been reinstated, effective immediately. The Flames next play against the Arizona Coyotes on Friday night.

The NHL issued a statement saying they "strenuously disagree" with Oldham's ruling and are trying to determine "what next steps may be appropriate."

The NHLPA, in a statement, agreed with Oldham's ruling "given that it was undisputed that Dennis suffered a concussion mere seconds" prior to colliding with Henderson.

Oldman concluded the NHL should not have gone beyond the 10-game minimum suspension specified in Rule 40.3, which states any player who deliberately applies physical force to an official in any manner, which physical force is applied without intent to injure, or who spits on an official, shall be automatically suspended for not less than 10 games.

During his summary description of the incident, Oldham stated that both Wideman and Henderson testified they could remember almost nothing about what happened during the minutes immediately after their heads hit the glass or the boards.

Seconds before Wideman collided with Henderson, Wideman was concussed on a check by Miikka Salomaki of the Nashville Predators.

Henderson testified that he felt as if he was "hit by a bus." He remains sidelined from officiating duties and still suffers from the head and neck injuries. In Oldman's opinion, it seems much more likely that the hit Henderson felt, the one that caused the concussion, was when his head hit the boards on the way down.

Oldman also explained that before, during and after the contact with Henderson, Wideman's head remained fixed toward the Flames' bench.

"He cannot have seen Henderson fall," Oldman wrote. "Then as the gate giving access to the bench began to open from the inside, Wideman stepped into the doorway just as another Nashville player skated closely by. Wideman then sat on the bench, did not think to close the gate, held his head down for several seconds, then raised it and looked around. He testified that he had no idea at the time that he had hit Henderson."

Bettman, who declined to speak about the specifics of the case during his appearance at the Sloan Analytics Conference in Boston on Friday morning, defended the appeals process. The decision was finalized nearly a month and a half after the original incident took place.

"This dragged out for a whole host of reasons, which may not have been necessary but I'm perfectly comfortable with the process," Bettman said. "We suspend players for a whole list of reasons, precisely when the event takes place moving forward. You have a serious incident, you need an in-person hearing, you're suspended pending the hearing. I think that's the most important thing we can do.

"What we've said is my decisions under certain circumstances could be subject to appeal. This process was something that was very important and also part of the [CBA] negotiations."

ESPN's Craig Custance and Pierre LeBrun and information from The Associated Press contributed to this report.