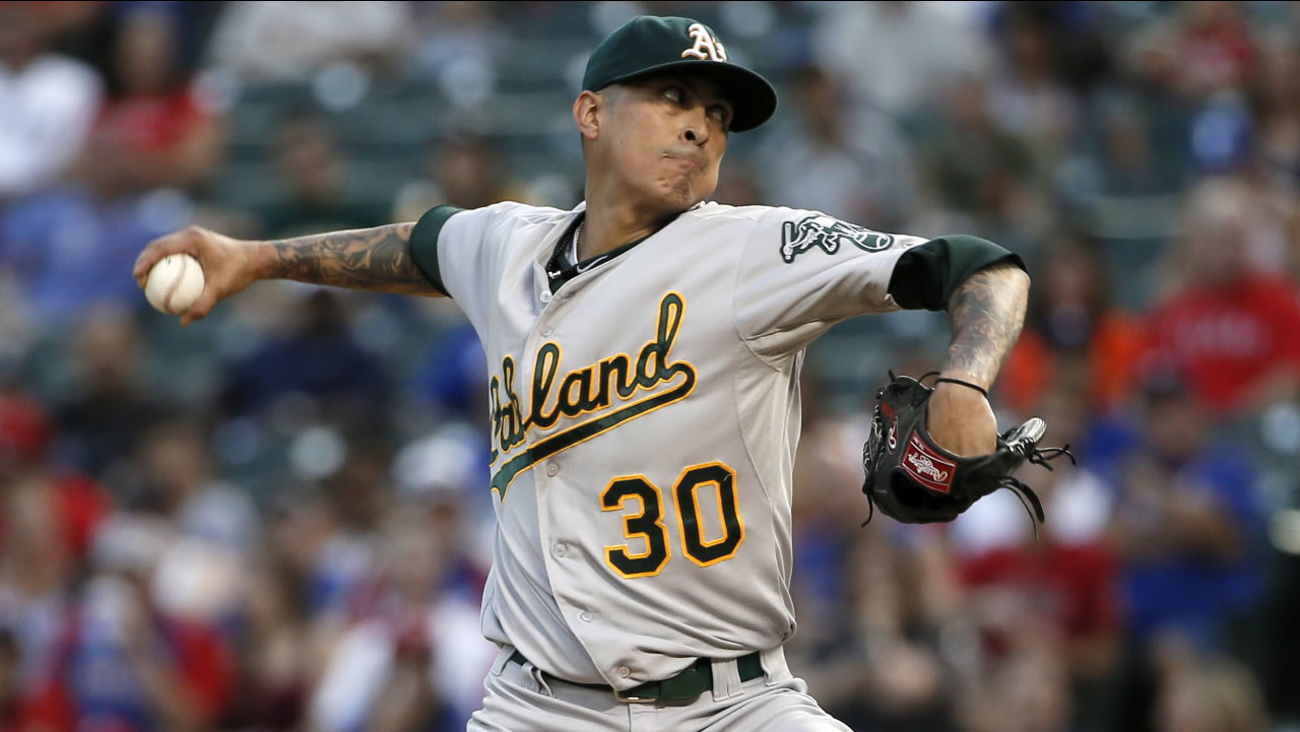 AP
ARLINGTON, Texas -- Oakland's Danny Valencia tipped his batting helmet toward Colby Lewis from second base after breaking up the Texas right-hander's perfect game with a leadoff double in the eighth inning.

"When you are witnessing great things happening, there's a mutual respect," Valencia said. "He was very competitive tonight."

Lewis settled for a two-hitter, and the most dominant performance at home by a Rangers righty since Nolan Ryan's record seventh no-hitter in 1991, leading Texas to a 4-0 victory over the Athletics on Friday night.

The 36-year-old simply jogged to his spot for defensive positioning after Valencia's hit down the left-field line. And when Lewis secured the shutout, he turned straight-faced to catcher Chris Gimenez for a quick hug. No big deal.

"I don't know, like I guess on any given night, but I don't look at myself like having no-hitter or perfect game stuff," said Lewis (15-8), who beat his previous career high in wins from 2011, the last of two straight seasons that the Rangers went to the World Series.

The home crowd wasn't. The fans gave him a standing ovation when the perfect game was gone. They did it again when he finished the eighth by striking out Max Muncy to strand Valencia at third.

And they were standing, clapping and chanting "Colby!" when he got Mark Canha on a game-ending fielder's choice to shortstop Elvis Andrus. Josh Phegley opened the ninth with a sharp single off third baseman Adrian Beltre's glove.

Mitch Moreland snapped an 18-inning scoreless streak for Texas with a two-run double in a three-run first inning off Oakland starter Jesse Chavez (7-15).

Lewis needed just 97 pitches, and the 21 straight batters retired to start the game were the most for a Texas pitcher since Yu Darvish got the first 26 before Marwin Gonzalez's two-out single in the ninth for Houston on April 2, 2013.

The veteran of 11 major league seasons - and two in Japan to try to get his career back on track - was 0-3 with an 8.62 ERA in his past three starts.

"He does throw some strikes," Oakland manager Bob Melvin said. "You just try to get a ball in the middle of the plate, and he wasn't throwing too many there. As the game goes along, and you don't have a hit, and sometimes you get a little too aggressive."