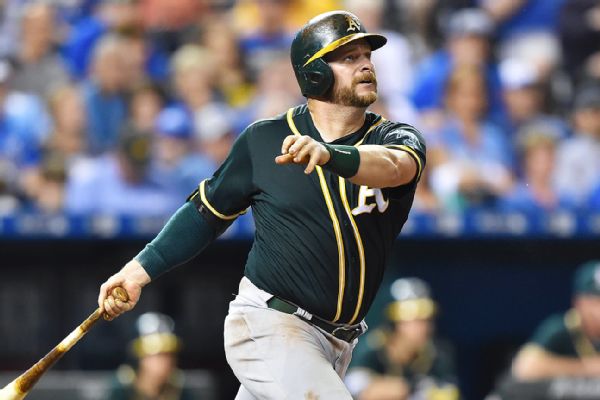 The Oakland Athletics on Thursday designated Stephen Vogt for assignment. The catcher was an All-Star in 2015 and '16 but has struggled this season.

Vogt is hitting .217 with four home runs and 20 RBIs. His struggles prompted the A's to move away from him being their primary catcher; he has been sharing the job withJosh Phegley.

A's general manager David Forst said the decision "was really hard ... entirely because of who Stephen is" as a person.

"... It's hard to think of anyone who's been a better member of our community," he said.

"This was really hard and entirely because of who Stephen is," A's general manager David Forst told reporters. "No one exemplifies the spirit of those playoff teams more than Stephen and it's hard to think of anyone who's been a better member of our community."

The A's have seven days to try to trade Vogt or place him onirrevocable outright waivers. If he goes unclaimed, the A's could ask him to accept a minor league assignment, but with more than three years of major league service, Vogt can reject such a move to opt for free agency instead.

In a conference call with reporters Thursday, Vogt implied he would choose free agency instead of a minor league assignment.

"I want to play because I'm a baseball player. I'm really good. The person I've shown the last couple of months is not who I am," he said.

Vogt told reporters that he sensed the A's were getting ready to move on without him based on his diminished playing time.

"It's something I understand, although I don't like it. It's definitely news that hit [his wife] Alyssa very hard. Oakland is a place we love. It's a place we watched our family grow. We had success here as a family and as a team. We've developed a lot of relationships that will last," he said.

In Wednesday's 5-1 loss to the Houston Astros, Vogt played left field for the first time since July 2, 2014. Several balls were hit his way as Oakland lost a third straight game since an impressive four-game sweep of the New York Yankees over the weekend.

Forst said Chapman was admitted to a hospital on Wednesday to receive intravenous antibiotics. He is expected to be discharged on Friday.

Maxwell is expected to take over as the A's regular catcher. He hit just .211 in nine games with the A's this season but was hitting .286 with two home runs and 14 RBIs in Nashville.