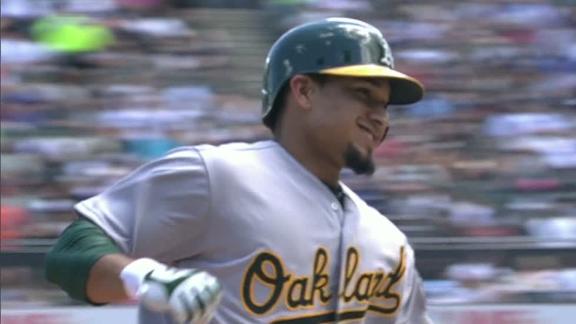 The Athletics recalled Barreto from Triple-A Nashville before Saturday's game in Chicago and placed infielder Chad Pinder on the 10-day disabled list. Barreto was a late add to Oakland's lineup at second base in place of Jed Lowrie, who was scratched because of a sprained knee.

After striking out in his first at-bat, Barreto homered in his second at-bat against White Sox starter James Shields, crushing a 400-foot shot over the wall in left-center field to give the A's a 6-0 lead in the third inning.

Barreto, Olson and Brugman became just the second set of teammates in major league history to hit their first career homers in the same game, according to the Elias Sports Bureau. The feat had not been achieved since 1914 by the Kansas City Packers of the Federal League.

"They said something about it was the first time it has happened in a while. It's awesome to be able to share that moment with guys that I already built relationships with," said Olson, who played with Brugman and Barreto in the minors.

Rookie pitcher Daniel Gossett picked up his first career win for the A's as well.

"It was a special experience for everyone," Gossett said. "To get out of there with my first win was just the icing on the cake. It was an awesome experience to be a part of, and I'm glad I was here."

Barreto was not originally scheduled to start because he was not available for infield drills. A's manager Bob Melvin was asked whether the 21-year-old infielder would remain with Oakland long term.

"Whether he's here for a period of time, I'm not sure about that," Melvin said. "It's nice to get guys here ahead of maybe when there's a lengthier stay involved. At some point in time, he's going to have a long stay here."

Barreto was acquired from the Toronto Blue Jays in the Josh Donaldson trade after the 2014 season. He started at second base and batted seventh against the White Sox on Saturday.

Barreto is considered the top prospect in Oakland's farm system and recently was rated No. 56 overall by ESPN's Keith Law in his top 100 prospects rankings. Barreto batted .281 with eight home runs and 32 RBIs in 68 games with Nashville.