Austin Rivers gets 11 stitches on cuts near eye, returns to game 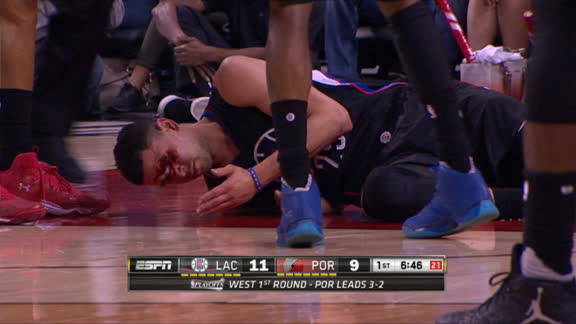 Rivers, starting at point guard in place of Paul, left the court to receive four stitches on top of his left eye and seven stitches below his eye. He returned to the court with 5:03 left in the second quarter and finished with 21 points, eight assists and six rebounds in 32 minutes of play in the Blazers' series-clinching106-103victory.

"I have never cussed in a press conference, but he played his ass off tonight," Clippers guardJamal Crawford said. "You look at his face, it looked like he was in a boxing match."

Rivers was hit in the face by an elbow from Trail Blazers forward Al-Farouq Aminu, who was going up for a rebound with 6:46 left in the first quarter. Rivers immediately hit the floor and was bleeding profusely before being taken to the locker room.

"I can't really see out of it," Rivers said. "We needed everybody out there."

Pablo Prigioni came in for Rivers before he returned in the second quarter.

On Tuesday, the Clippers announced that Griffin would miss the remainder of the postseason and Paul would be out indefinitely.

Griffin aggravated a left quadriceps injury on Monday in Game 4 of the series. An MRI revealed no further structural damage, and the team said he'll be ready for the start of training camp.

Paul, meanwhile, underwent surgery Tuesday in Los Angeles to repair a right hand fracture that he suffered in the third quarter of Monday's game. Team sources indicated the recovery time for Paul is four to six weeks.