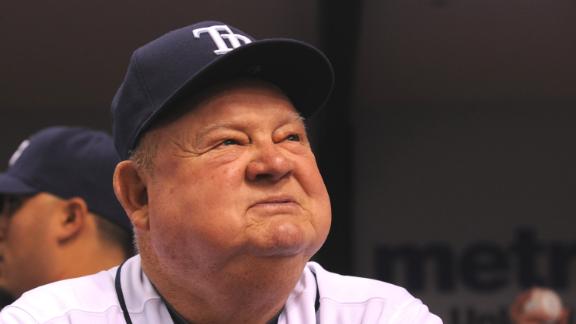 He played alongside Jackie Robinson on the only Brooklyn Dodgers team to win the World Series. He coached Derek Jeter on the New York Yankees' latest dynasty. And his own manager once was the illustrious Casey Stengel.

For 66 years, Zimmer was a most popular presence at ballparks all over, a huge chaw often filling his cheek. Everyone in the game seemed to know him, and love him.

Zimmer was still working for the Tampa Bay Rays as a senior adviser when he died Wednesday at a hospital in nearby Dunedin. He had been in a rehabilitation center since having seven hours of heart surgery in mid-April.

Zimmer started out as a minor league infielder in 1949, hitting powerful shots that earned him the nickname "Popeye." He went on to enjoy one of the longest-lasting careers in baseball history.

Zimmer played on the original New York Mets, saw his Boston Red Sox beaten by Bucky Dent's playoff homer and got tossed to the ground by Pedro Martinez during a brawl.

Oh, the tales he could tell.

"Zim was around when I first came up. He was someone that taught me a lot about the game -- he's been around, he's pretty much seen everything," Jeter said after the Yankees lost to Oakland 7-4. "His stories, his experiences."

With the champion Yankees, Zimmer was Joe Torre's right-hand man as the bench coach.

"I hired him as a coach, and he became like a family member to me. He has certainly been a terrific credit to the game," Torre said in a statement.

"The game was his life. And his passing is going to create a void in my life and my wife Ali's. We loved him. The game of baseball lost a special person tonight. He was a good man," he said.

Zimmer was a career .235 hitter in the big leagues, but numbers could never define all that he meant to the game. He did have tremendous success, too -- his teams won six World Series rings and went to the postseason 19 times.

Zimmer's No. 66 Rays jersey had been worn recently by longtime Tampa Bay third-base coach Tom Foley in tribute -- the team wanted that, and MLB decided a coach should wear it. Foley was seen crying in the dugout during the Rays' 5-4 loss to the Marlins.

He later remembered the Rays going as a team to see "42," the movie about Robinson.

"He would talk about it. He had a lot of stories, a lot of history coming out of him," Foley said. "He had a lot to give, a lot to offer, and he did."

"We lost a good buddy tonight," said Maddon, fighting back tears. "I'm going to miss his advice ... his feistiness and fire. He was about winning, doing whatever it takes to win."

After the game, the Rays displayed Zimmer's jersey:

#Zim's No. 66 hangs in our clubhouse tonight: pic.twitter.com/7VUx2NU8ma

- Tampa Bay Rays (@RaysBaseball) June 5, 2014Earlier this season, the Rays hung a banner in the front of the press box at Tropicana Field that simply read "ZIM."

"Today we all lost a national treasure and a wonderful man," Rays principal owner Stuart Sternberg said in a statement.

There was a moment of silence at Dodger Stadium for Zimmer before Los Angeles played the Chicago White Sox.

"On behalf of Major League Baseball and the many clubs that 'Popeye' served in a distinguished baseball life, I extend my deepest condolences to Don's family, friends and his many admirers throughout our game," commissioner Bud Selig said in a statement.

Zimmer's biggest admirer was his wife, "Soot" -- they were married at home plate during a minor league game in 1951. Two years later in the minors, Zimmer's path took a frightening turn -- he was beaned by a fastball and left in a coma, and doctors had to put metal screws in his head.

He recovered well enough to wear a lot of uniforms during his 56 years in the majors. He played for the Dodgers, Mets, Cubs, Cincinnati and Washington. He managed San Diego, Boston, Texas and the Cubs.

"Probably the best baseball man I knew," said Billy Connors, a coach under Zimmer with the Chicago Cubs, to The Associated Press.

Steinbrenner, the son of late Yankees owner George Steinbrenner, said Torre and Zimmer were the "perfect team" during New York's run that brought four titles in a five-year span.

"Joe was low-keyed. Zim would get fired up. He was a bench coach for real," Steinbrenner said. "He was an extremely important part of the 1990s success."

Hall of Famer Johnny Bench took to Twitter to pay homage to Zimmer:

My heart is very sad. A HOF person and someone overlooked for his service has moved on. Don Zimmer RIP my friend and manager. @MLB

"Don't blame them all on me," Zimmer once said. "I got traded after the first 30 days."

Zimmer was the 1989 NL Manager of the Year with the Cubs and was at Yankee Stadium for three perfect games, by Don Larsen in the 1956 World Series and by David Cone and David Wells in the late 1990s.

"Zim was a great man, and there are no words to explain what he brought to us and what he meant to me," Rays star Evan Longoria said.

"He taught me a lot of things, and those days of sitting in the dugout with him will be missed," he said.

"He always lit everybody's faces up whenever he'd walk in," he said. "Zim had a passion for baseball that rubs off on everybody."

I cant find the words to express how I feel about Zims passing. I wouldn't be in the big leagues if Zim wasnt there for me as a young player

- BJ Upton (@BJUPTON2) June 5, 2014"It's a sad day for the game of baseball," Pittsburgh manager Clint Hurdle said after a 3-2 loss at San Diego. "Don impacted lives from the time he put a uniform on in the minor leagues until today."

Zimmer is survived by his wife; son Thomas, a scout with the San Francisco Giants; daughter Donna; and four grandchildren.

Don Zimmer Dies At 83
MLB legend Don Zimmer, who spent 66 years as a manager, player, coach and executive, died Wednesday at the age of 83.

Jeter, Girardi Remember Zimmer
Joe Girardi and Derek Jeter remember Don Zimmer, who was the Yankees bench coach from 1996 to 2003.