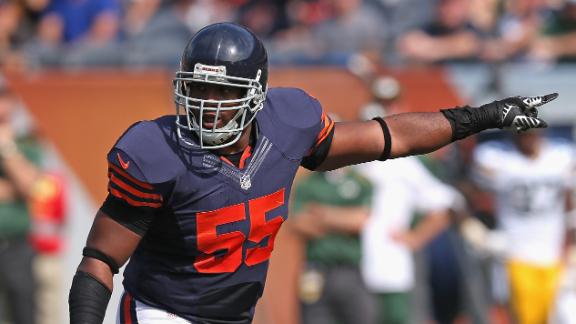 The Chicago Bears placed linebacker Lance Briggs on injured reserve Friday due to a groin injury, and it's likely the 2014 season was his last with the team.

A 12-year veteran, Briggs suffered a groin injury in the second quarter of the team's Nov. 23 win over the Tampa Bay Buccaneers, and the ailment kept the linebacker out of Thursday's loss to the Detroit Lions.

During the team's pregame show on WBBM, Bears general manager said Briggs would be "out for an extended period of time."

A seven-year Pro Bowler with a contract set to expire at the end of the season, Briggs, 34, isn't expecting the Bears to put an offer on the table prior to him hitting free agency.

"It's the last year of my deal. It's not like I'm going to magically show up after this year, and they're going to open the gates up for you," Briggs said Nov. 6. "I've talked to my buddy [former Bears defensive end] Alex Brown. Those gates are closing, you're a free agent. I know the reality of it, and I'm proud of all the years I've had here. It's been great."

Prior to sitting out Thursday's game, Briggs missed three other games this season due to a rib injury.

Briggs currently earns $4.75 million in base salary from a three-year extension he signed in 2012, but likely won't be able to command such a salary to return to the Bears in 2015. Briggs said "I don't know" when asked whether he thinks 2014 will be his last season in the NFL.

Besides, Briggs watched negotiations go awry with former Bears teammate Brian Urlacher, who wasn't re-signed prior to the 2013 season, and subsequently retired.

"I understand it. I understand this is probably my last year as a Chicago Bear," Briggs said. "But for me, I just, I really enjoy my teammates, and it's been unfortunate to watch from the sidelines because I want to see them find success."

Briggs has missed 11 games over the past two seasons, including seven outings last year due to a fractured shoulder.

Briggs contributed 63 tackles, an interception, and a forced fumble to go with two pass breakups and a quarterback pressure in eight starts this season.

Throughout his career with the Bears, Briggs has produced 1,564 tackles, 95.5 tackles for loss, 16 interceptions, 15 sacks, 19 forced fumbles, and seven fumble recoveries in addition to scoring six defensive touchdowns in 170 starts over 173 contests. Briggs' six defensive touchdowns rank as the third most in franchise history. His 170 starts rank as the fifth most in franchise history, trailing Walter Payton (184), Olin Kreutz (183), Urlacher (180) and Mike Singletary (172).