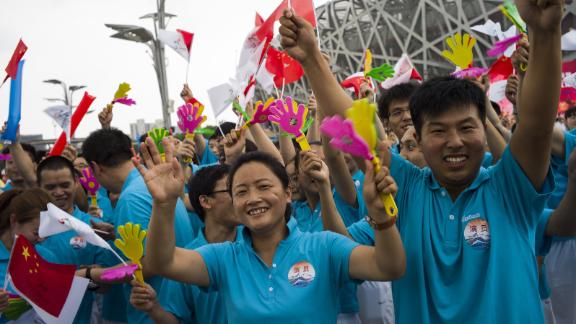 KUALA LUMPUR, Malaysia -- Throughout more than 120 years of Olympic history, no city has hosted both the winter and summer games. Now, Beijing will be the first do it -- and in the span of just 14 years.

The Chinese capital was awarded the 2022 Winter Olympics on Friday, beating Kazakh rival Almaty 44-40 in a surprisingly close vote marred by technical problems, taking the games back to the city that hosted the summer version in 2008.

Beijing was seen by the International Olympic Committee as a secure, reliable choice that also offered vast commercial opportunities in a new winter sports market of more than 300 million people in northern China.

"It really is a safe choice," IOC president Thomas Bach said. "We know China will deliver on its promises."

The IOC's secret vote was conducted by paper ballot, after the first electronic vote experienced technical faults with the voting tablets and was not counted. The result of the first vote was not disclosed. There was one abstention in the paper ballot.

Bach bristled when asked at a news conference about the possibility of any voting irregularities.

"This is an unfair question," he said. "You are taking a lot of assumptions. ... Obviously there was a technical issue with the voting system, the devices. If the scrutineers decide to be on the very safe side to have a new vote, to have this vote on a ballot paper, then this speaks for itself for a very fair election in everybody's interest."

Beijing came in to the vote as the strong favorite, despite its lack of natural snow.

Almaty had hoped to bring the games to Central Asia for the first time, but was a lesser-known quantity and viewed as a riskier choice by IOC members. Kazakh Prime Minister Karim Massimov made a last-minute impassioned plea for the IOC to be "brave" and give the games to his country.

"Almaty is not a risky choice for 2022," Massimov told the IOC delegates. "In fact, we are quite the opposite. ... We are a golden opportunity to prove that smaller, advancing nations can successfully host the Winter Games."

The tight margin caught most IOC members by surprise.

"Gee, you wouldn't have picked that close result a few months ago," IOC vice president John Coates of Australia said. "That address by the prime minister today was brilliantly crafted. I think that's why it got close. But the size of China, the number of people that are going to be introduced to winter sport now, those were all factors."

Friday's results means the Olympics will be held three times in a row in east Asia: the 2018 Winter Games in Pyeongchang, South Korea, the 2020 Olympics in Tokyo, and 2022 in Beijing.

"With the real globalization of the world, the growing importance of Asia, not only in sports but also in all areas of life, I think it is more or less normal that we have more Olympic Games taking place in Asia," Bach said.

The IOC decision was met with sharp criticism from human rights groups, who said the situation in China hasn't improved since the 2008 Olympics. Sophie Richardson, China director at Human Rights Watch, called it a "a slap in the face to China's besieged human rights activists."

"Over the next seven years, the IOC has enormous work to do in China to win the credibility on human rights that will ensure a successful Olympics," she said.

Beijing and Almaty had both been considered long shots when the 2022 bid race opened two years ago. But they were the only two candidates left after four European cities -- including Oslo and Stockholm -- pulled out for political or financial reasons.

The contest was a study in contrasts between the world's most populous nation and a former Soviet republic seeking to establish itself on the world stage. China's political and economic might was a big advantage against its northwestern neighbor, which became independent in 1991.

"One thing I can say is Almaty was ready to host the 2022 Winter Games," he said.

Beijing plans to use several venues from the 2008 Olympics, including the Bird's Nest and Water Cube. But the snow and sliding events would be at venues in Yangqing and Zhangjiakou, 60 and 140 kilometers (40 and 90 miles) outside Beijing. A planned high-speed rail line to Zhangjiakou is supposed to cut travel time to 50 minutes.

Beijing will stage 2022 Olympics
The Chinese capital Beijing will host the 2022 Winter Olympic Games after an International Olympic Committee vote.