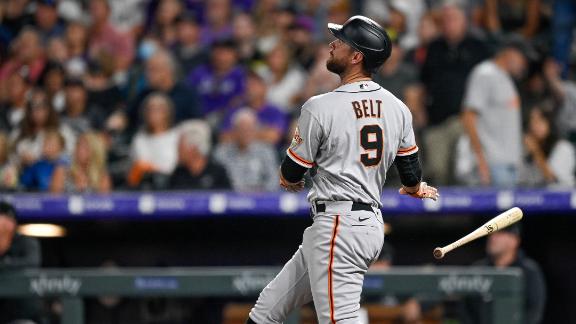 Instead, he just went deep - twice.


Belt's blasts helped San Francisco set a franchise mark for homers in a season, and the Giants beat the Colorado Rockies 7-2 on Saturday night to extend their lead in the NL West.

Belt hit a solo homer in the first inning and a three-run shot in the fifth off Jon Gray. It was the eighth multi-homer game of Belt's career.

His second drive to right field was the team's 236th homer of the season, surpassing the 235 hit by the 2001 club. That squad featured Barry Bonds' major league-record 73 homers.

"I didn't know that my homers tied or broke it," Belt said. "I thought we would probably do it sometime this next week. ... Pretty cool."

A team effort, too. San Francisco has had 20 players homer this season, with 10 reaching double figures. Belt's 29 homers lead the way.

"Pretty impressive feat," Giants manager Gabe Kapler said. "This franchise has been around for a really long time."

San Francisco stretched its division lead to two games over the rival Los Angeles Dodgers, who lost in Arizona. Both teams have seven games remaining.

Anthony DeSclafani was lifted for a pinch-hitter after going four innings and allowing two runs. His pitch count was at 77 when he was removed. DeSclafani has gone over the 90-pitch plateau once since early July.

Down 7-2, Colorado made things interesting in the ninth with three straight singles. But Dominic Leone wiggled out of the jam, getting C.J. Cron to ground out and end the game.

Gray (8-12) was pulled soon after giving up Belt's second homer. The right-hander went 4 2/3 innings and allowed four runs. He walked off the mound to a smattering of applause in what could be his final start at Coors Field with Colorado. Gray is set to become a free agent after the season.


"It's been a heck of a ride," Gray said. "Winning a game for the Rockies is amazing, especially at Coors Field. I have appreciated every single bit of it."

This was the eighth straight start in which Gray didn't pitch more than 5 1/3 innings.

"It's a little bit of an issue," Rockies manager Bud Black said. "The simple answer is that there's some mistakes in there that cost him."

Like the mistakes to Belt, who homered on a fastball and slider from Gray.

"He's given the entire offense a boost of confidence," Kapler said. "He knows he's a dangerous hitter at the plate."

The first pitch was pushed back about 25 minutes as the Rockies bestowed praise and gifts upon newly inducted Hall of Famer Larry Walker in an on-field celebration. The team retired his No. 33, with a plaque going up on the mezzanine level. It's right next to that of Todd Helton (No. 17).

Walker threw out the first pitch, too - a strike to his father, followed by a hug.

Giants: Kapler said Johnny Cueto (right elbow strain) is "moving in the right direction" and remains an option for the Giants down the stretch. He could even pitch out of the bullpen if needed. ... OF Mike Yastrzemski (knee) entered as a pinch-hitter in the eighth and lined a two-run single to make it 7-2. He remained in the game.


The Giants improved to 14-4 against Colorado, tied for their most wins in a season over the Rockies.

Walker encounters a variation of "33" just about everywhere. Such as when his daughter and her boyfriend made a recent purchase and the bill came to $33. Or how he's been waking up lately at 3:30 a.m. Or how he pointed out he's the 333rd player to be enshrined in the Hall of Fame.

These signs were more obvious: A giant "33" etched into the outfield grass at Coors Field, with "33" also stenciled along the baselines. His retired number was unveiled to the crowd by his daughters.

The Giants (101-54) have won 100 games for the eighth time in franchise history. They're tied with the Dodgers and Braves for the fourth-most, trailing only the Yankees (21), A's (10) and Cardinals (nine).