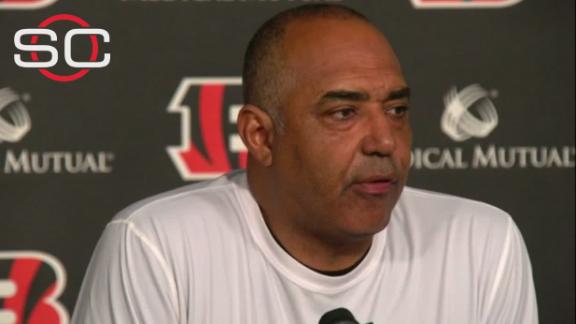 The issue of Marvin Lewis' future in Cincinnati really isn't much of an issue, as the Bengals have no plans to make a head coaching change at this time, sources told ESPN's Adam Schefter.

With the Bengals' wild 18-16 loss to the Pittsburgh Steelers on Saturday, Lewis became the first NFL coach to sport an 0-7 postseason mark. Lewis, 57, has a 112-94 record with the Bengals in the regular season. He has been the team's head coach since 2003.

The Bengals' meltdown in Saturday's playoff loss came after Lewis led his team to a franchise-record-tying 12-4 regular-season mark and a fourth AFC North championshipwithout the benefit of having starting quarterback Andy Dalton (broken thumb) for the last four-plus games.

The Bengals had rallied from 15 points down to take a 16-15 lead in the fourth quarter before Jeremy Hill lost a fumble with Cincinnati trying to run out the clock.

On Pittsburgh's ensuing possession, penalties from two of the Bengals' most aggressive defenders all but decided perhaps the most gut-wrenching of the seven postseason losses Cincinnati has suffered under Lewis' watch.

Bengals linebacker Vontaze Burfict was flagged for unnecessary roughness when he hit a defenseless Antonio Brown after Brown jumped in an effort to catch a pass from Ben Roethlisberger. Then, as officials were sorting out the penalty and trainers evaluated Brown on the field for a concussion, Bengals cornerback Adam Jones drew an unsportsmanlike conduct penalty when he got in Steelers assistant coach Joey Porter's face during an on-field scrum between the teams.

Burfict's and Jones' 15-yard penalties not only put the Steelers in field goal range, but gave Chris Boswell a 35-yard chip shot to win the game.

"We destructed on ourselves," Lewis said after the game.

Burfict is facing a suspension for his hit on Brown, a source familiar with the situation told Schefter.

Former Bengals quarterback Boomer Esiason was especially critical of Lewis on the CBS broadcast after the game.

"I'm a former Bengal. I'm embarrassed by the way that this game ended and by the way these guys carried themselves on the football field today," Esiason said. "I feel bad for Marvin Lewis. I'll tell you one thing, if Lewis can't control his players, then maybe Marvin Lewis shouldn't be on the sideline coaching that drek."

The Bengals have not won a playoff game since 1990, when Esiason was the team's quarterback. That's the longest active drought in the NFL.