Bill O'Brien downplays reports of tension between him and Brock Osweiler 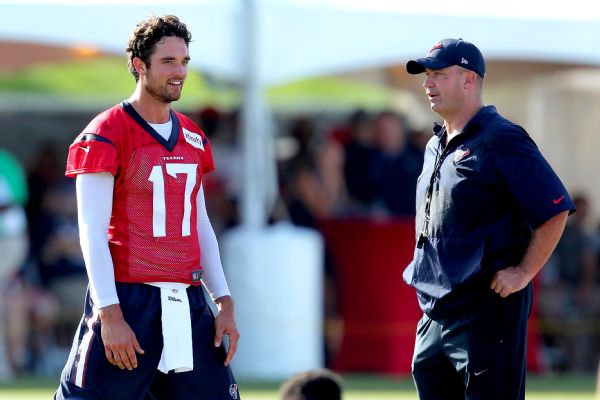 HOUSTON -- Houston Texanscoach Bill O'Brien downplayed the significance of reports of tension between him and quarterback Brock Osweiler.

CBS Sports reported Sunday that O'Brien and Osweiler had a "heated exchange" last weekafter a quarterbacks meeting while reviewing film of the Week 5 loss to the Minnesota Vikings after Osweiler had objections to playcalling.

O'Brien called the report the "biggest non-story of the year" and said it's a side effect of coaching in an intense environment.

"Anybody that's been around me knows that I really only know one way to go about it," O'Brien said Monday. "That's to work very hard and to do it in a very intense environment. I think that's the type of players we have. So when you're coaching football and playing football, and you're in a competitive environment where everyone is pulling the same rope and everybody is trying to do their very best to win the game, things are going to happen."

O'Brien took over the playcalling duties from offensive coordinator George Godsey after the Texans were shut out at New England in Week 2.

O'Brien said it takes time for a coach and his quarterback to develop a style for working together, and he enjoys working with Osweiler.

"What we know about Brock is that he's a very hardworking guy. A very prepared guy. And we enjoy coaching him. He's learning, and we just were happy to see him be able to help us win that game [Sunday] night."

Osweiler was asked about the report after the Texans' 26-23 victory over the Indianapolis Coltson Sunday, and he said his interactions with O'Brien and the rest of the coaching staff "are nothing out of the norm."